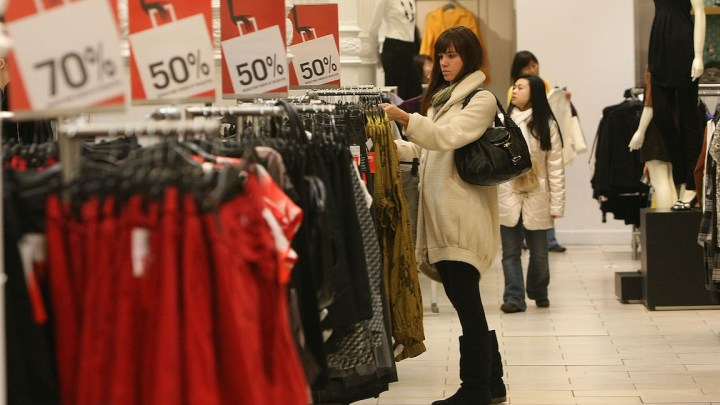 COPY
In April, people spent less on things like clothing and furniture and more at bars and restaurants. Mario Tama/Getty Images

In April, people spent less on things like clothing and furniture and more at bars and restaurants. Mario Tama/Getty Images
Listen Now

The U.S. Census Bureau just released monthly retail sales, and they were … amiss. Analysts had predicted about a 1% jump, but instead they were flat, with 0% growth in April. So what happened?

Most of the people who got those $1,400 stimulus checks from the government received them in March, which meant they had extra cash to spend. That is why we saw retail sales in March jump by almost 11%.

“March was really, really strong, largely because of stimulus,” said Ted Rossman, an analyst at CreditCards.com. “So I actually think that we can spin this as a positive in a way that April was basically flat with March.”

Zero percent growth means that consumers spent the same amount — almost $620 billion — that they did the month before. And considering that for many people, those stimulus checks were long gone, “April represented the economy standing on its own two feet a bit more. To match the March level, but without the March stimulus, it’s actually not so bad,” Rossman said.

“I would not look at the data as a reason to despair,” said Dana Peterson, chief economist at The Conference Board. “I just think it’s a function of the volatility given the checks.”

“So I think it’s very difficult for economists to estimate these things,” Peterson said.

“Bars and restaurants are really the only service that’s in this report,” said Rossman of CreditCards.com. Not included: spending at places like hotels, hair salons, theaters. But people are spending more on those services now that they’re vaccinated.

We’ll need time to know whether a shift from goods to services is happening. But in April, people spent less on things like clothing and furniture and more at bars and restaurants.