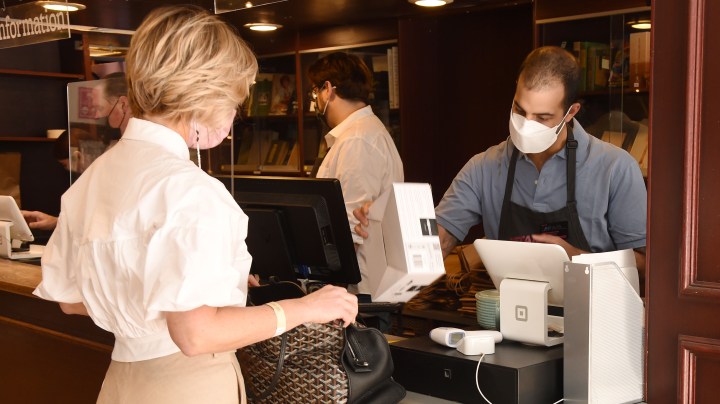 COPY
Despite consumer purchases being down 1.1% last month, they were still nearly 16% higher than in July 2020. Gary Gershoff/Getty Images for Housing Works
COVID-19

Despite consumer purchases being down 1.1% last month, they were still nearly 16% higher than in July 2020. Gary Gershoff/Getty Images for Housing Works
Listen Now

Retail sales numbers were down by 1.1% in July, the U.S. Census Bureau reported Tuesday, a much bigger drop than economists expected. Spending fell on almost everything.

The obvious explanation for this drop in sales would seem to be the coronavirus delta variant and the idea that it’s making people stay home again to protect themselves.

Ted Rossman at CreditCards.com is not convinced.

“I’m not sure that the delta variant is really the biggest reason here,” he said.

The retail sales report included sales at bars and restaurants, “and they actually grew a little bit from June to July, not as fast as they had been growing previously, but still, people are getting out there,” Rossman said.

It’s not that the delta variant isn’t a factor at all. A lot of people thought they were going back to the office this September or that their kids were going back to school in person, and for some, that’s not happening. This could be why sales of clothing dropped.

“Consumer demand is not unlimited,” he said. “It does seem, and a lot of this is anecdotal, but it does seem that when people are faced with higher prices, something has to give.”

One category, in particular, that dragged down the numbers was car sales.

“There’s this big chip shortage,” said Dana Peterson, chief economist at The Conference Board. “So cars need computer chips, and if you don’t have those chips, then you can’t build the cars. So many retailers only have the available inventory that’s on the lot. Otherwise, their customers have to wait months to purchase a car.”

And yeah, prices on cars are rising because of all this.

As always, we’ve gotta put these numbers in context: Sales were down 1.1% last month. But they were still almost 16% higher than in July 2020.