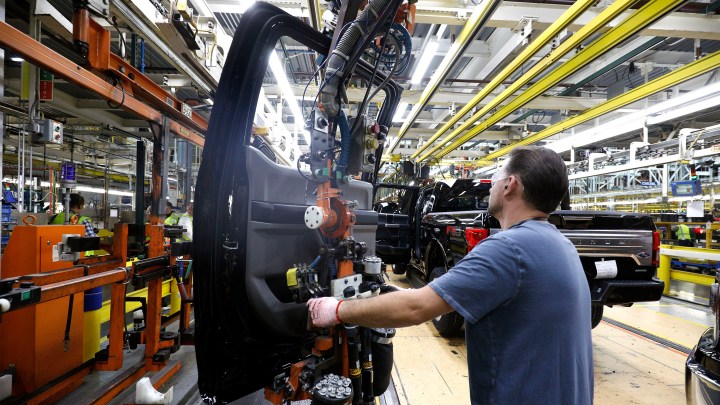 Ford is temporarily stopping or slowing production at a number of its factories, including plants that make its most popular truck, the F-150.

That’s because of the semiconductor chip shortage we’ve been talking about lately. The average wait time for chips right now, according to a report from the Susquehanna Financial Group, is 18 weeks.

What does this mean for the people who actually make the cars?

The U.S. auto industry goes through a lot of ups and downs. “It’s very cyclical, and it’s subject to things like supply-chain issues,” said Michelle Krebs at Cox Automotive, who added that “unfortunately, autoworkers are rather used to this roller-coaster ride of having jobs and then being laid off.”

People who work at Ford, General Motors and Stellantis (formerly Chrysler) are pretty well-protected from that unpredictability because they’re unionized.

Kristin Dziczek, at the Center for Automotive Research, points to a provision in United Auto Workers contracts saying that if your plant is idled, your employer “will make up the difference between the unemployment that you get from the state and a large share of what you would have earned had you been working.”

And, often, the layoffs are temporary. Andy Challenger, at the outplacement firm Challenger, Gray & Christmas, said that’s the case now. And the automakers are making sure their employees know it.

“Because there is an overall labor shortage occurring right now, too. So there probably is some concern from these manufacturers that those people will go out and find new jobs in the interim if they keep them on furlough for too long,” he said.

Closing plants that produce the F-150 for very long would be a big deal for another reason, said Dziczek at the Center for Automotive Research.

And that could affect employees as well because they get profit-sharing checks.

“They’ve been enormous — 8, 10, $12,000 a year — for a number of years now. That’ll be a hit to personal income for workers who get profit-sharing,” Dziczek said, adding that the hit would extend to local economies, where those checks are spent.