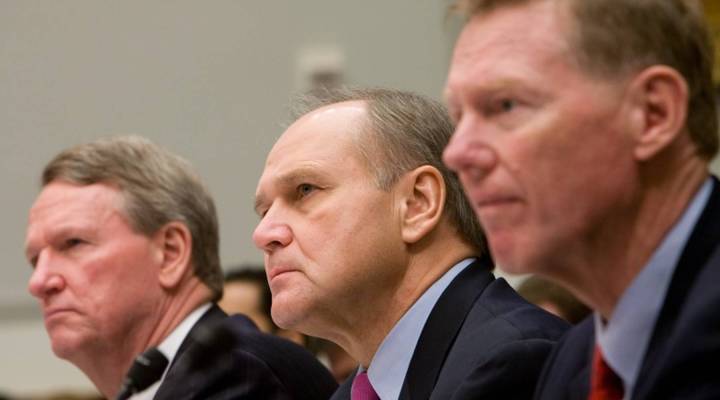 From left, G. Richard Wagoner Jr., CEO of General Motors; Robert Nardelli, CEO of Chrysler; and Alan Mulally, CEO of Ford, testify at a hearing on the U.S. auto industry on Capitol Hill on Dec. 5, 2008. GM and Chrysler were bailed out with TARP funds; Ford received other federal assistance. Photo by Brendan Hoffman/Getty Images
Divided Decade

From left, G. Richard Wagoner Jr., CEO of General Motors; Robert Nardelli, CEO of Chrysler; and Alan Mulally, CEO of Ford, testify at a hearing on the U.S. auto industry on Capitol Hill on Dec. 5, 2008. GM and Chrysler were bailed out with TARP funds; Ford received other federal assistance. Photo by Brendan Hoffman/Getty Images

In late 2008, panic gripped global financial markets, U.S. employers were laying off hundreds of thousands of workers every month and consumer spending and the stock market were plummeting. In the waning days of the Bush administration, Congress authorized the Troubled Asset Relief Program, or TARP. Some $426 billion in taxpayer money would soon be lent or directly invested in major banks and corporations to try to stabilize the financial system and prevent even more job losses.

About 20 percent of the total TARP funds — $80 billion — went to bail out General Motors and Chrysler. As described in an account of the crisis, “Detroit Back From the Brink,” by Chicago Fed economists Thomas H. Klier and James Rubenstein, the automakers were headed for insolvency as auto sales plummeted. The government authorized emergency loans so the companies could continue paying bills and making payroll, then go through a structured bankruptcy process and quickly return to production. Chrysler emerged as a newly merged company with Italian-based Fiat. Ford did not ask for a government bailout, but received other financial assistance. Ford supported the GM and Chrysler bailouts to protect its supply chain and dealer network.

To run the auto bailout part of TARP, the new Obama administration created the White House Council on Automotive Communities and Workers.

In exchange for the TARP bailout, the companies and the United Autoworkers were forced to accept concessions and restructure. The companies reduced management ranks and executive pay; closed more than a dozen assembly plants; cut production capacity and discontinued brands; and reduced labor costs for current workers and retirees.

So, did risking $80 billion in taxpayer money to give the Big Three domestic automakers a chance to survive pay off?

“It felt like economic Armageddon. We were losing millions of jobs,” Mark Zandi, Moody’s chief economist, says of the Great Recession. He’s unequivocal that the bailout was crucial to reviving U.S. auto industry.

“It was a slam-dunk success,” said Moody’s chief economist Mark Zandi, who testified in a contentious Senate hearing alongside the embattled Big Three auto CEOs in December 2008. Zandi points out that following the bailout, auto-industry employment stabilized and then rebounded, and the companies re-emerged as profitable entities.

Ten years later, Zandi is unequivocal that the auto bailout was crucial to reviving U.S. industry in the Great Recession. For one thing, the U.S. recovered all but about $9 billion of the auto bailout money.

“It felt like economic Armageddon. We were losing millions of jobs,” he said. “The real concern was that the auto companies would go into bankruptcy and never come out, be completely liquidated. They’d shut factories, everyone would be fired. All the suppliers, the dealerships, would be liquidated, and there would be no U.S. auto industry left. That’s what really spooked people.”

But Zandi also acknowledges that “in theory, this didn’t feel like good policy. You don’t want to bail out people who make mistakes, and clearly the automakers had their fair share of mistakes. But practically speaking, there was no choice. This was people’s jobs on the line, our economy on the line.”

At the time, there were plenty of critics of the auto bailout, including Republican legislators from southern states with foreign-owned auto plants. When Sen. Carl Levin, D-Mich., called the imminent collapse of the domestic auto industry “a national problem,” Sen. Richard Shelby, R-Ala., responded: “I don’t say it’s a national problem … but it could be a national problem — a big one — if we keep putting money in.”

Economist Daniel Ikenson at the Cato Institute was a leading voice at the time against bailouts of the big banks and the automakers. He said he still feels it was the wrong way to go.

“My concern was that the normal process of market capitalism was being disrupted,” he said. “By going in to bail out companies — not the industry, we were bailing out a couple of companies that had made bad decisions — we were shielding them from the effects of their decisions.”

Ikenson and other free-market economists argued that by protecting GM and Chrysler from going out of business after a protracted bankruptcy process, the bailout punished the two automakers’ competitors — Ford and the foreign transplants operating in the United States. And Ikenson said he believes that today, automakers make riskier business decisions than they would if the government hadn’t established a precedent via the bailout that major domestic automakers are “too big to fail.”

One of the policymakers weighing the pros and cons of the auto bailout at the time was Austan Goolsbee. The University of Chicago economist served as a member of President Barak Obama’s Council of Economic Advisers in 2009 and chaired the Council in 2010.

“To rescue one industry at a time of recession was tremendously unpopular,” Goolsbee said. “People’s attitude was: ‘Things are tough everywhere. Why should they get special treatment?’”

“Is the situation too far gone?”

Goolsbee initially opposed the bailout in meetings with National Economic Council Director Larry Summers, because he was doubtful it would succeed. He said he worried: “If we decide to do this, will it even work? Or is the situation too far gone, will the government just lose billions of dollars?”

Ultimately, Goolsbee came to support the bailout, fearing that a significant portion of U.S. manufacturing wouldn’t survive if the government didn’t try to save GM and Chrysler. The question before policymakers at the time, he said, was this: “Should we as a nation always step in to bail out companies that get in trouble?” His answer: “Absolutely not. But we’re in the deepest recession of our lifetimes. If these companies collapse, it’s going to spiral.”

In spite of the bailout, autoworkers are worse off in terms of income than before the Great Recession, says Kristin Dziczek of the Center for Automotive Research. Above, Chrysler workers install a windshield on a truck in Warren, Michigan, in 2014.

In a report prepared at the depths of the financial crisis, the nonprofit Center for Automotive Research predicted that 3 million jobs would be lost — including in auto assembly, parts supply and dealerships — if GM, Ford and Chrysler all went out of business.

Kristin Dziczek, CAR director of labor and industry, points out that by 2008, the domestic automakers were already in deep trouble, with too much production capacity, unpopular gas-guzzling vehicles and significantly higher labor costs than their foreign-owned competitors operating in the United States. She said the post-bailout restructuring allowed the domestic producers to operate profitably again — with fewer and newer auto plants, competitive labor costs and lower production volumes.

Dziczek said that without the bailout, there would still be an auto industry in the United States today. But it would be smaller and centered primarily in the lower-wage, nonunion foreign-owned assembly plants in the South.

“The economy would have come back to equilibrium eventually,” Dziczek said. “But the hit to the Upper Midwest would have taken decades to recover from. Government intervention saved GM and Chrysler and the supply chain that was tied to them and the other companies — Ford, Honda, Toyota, Nissan.”

In the Great Recession, auto-manufacturing employment fell by more than one-third, a loss of 334,000 jobs, according to the Bureau of Labor Statistics. Membership in the United Autoworkers fell by 150,000, according to a union spokesperson. Over the ensuing decade, as vehicle sales rebounded and production ramped up, those job losses were gradually reversed. In July 2016, U.S. auto-manufacturing employment finally surpassed its prerecession level (957,000 in December 2007). The UAW is still more than 50,000 members short of its prerecession high.

Dziczek points out that in spite of the bailout and revival of some auto-dependent communities, many union autoworkers are worse off in terms of income than before the Great Recession. The bailouts led to a decade-long pay freeze for workers hired before 2007, whose top wage remained at $28 an hour. Workers hired after 2007 were paid under a two-tier wage-and-benefit system that set their compensation lower — $16 an hour to start, topping out at $20 an hour. Under the UAW’s 2015 contracts with GM, Ford and Fiat Chrysler, the two-tier system is being phased out. Post-2007 hires will catch up to the top legacy wage of $28 an hour in 2023.

Dziczek said the bailout did save the domestic automakers, and prevented catastrophic economic decline for auto-dependent communities across the Upper Midwest. She said hundreds of thousands of autoworker jobs were saved as well, though many union autoworkers have lost ground economically. “In order to get the [bailout] financing, the U.S. automakers had to pay a wage that was competitive with the international producers,” she said. “The loss of membership and of negotiating power meant that the UAW went from being wage setters to wage takers.”

Correction (Nov. 14, 2018): An earlier version of this story included incorrect numbers for auto manufacturing employment in the U.S. The text has been corrected.