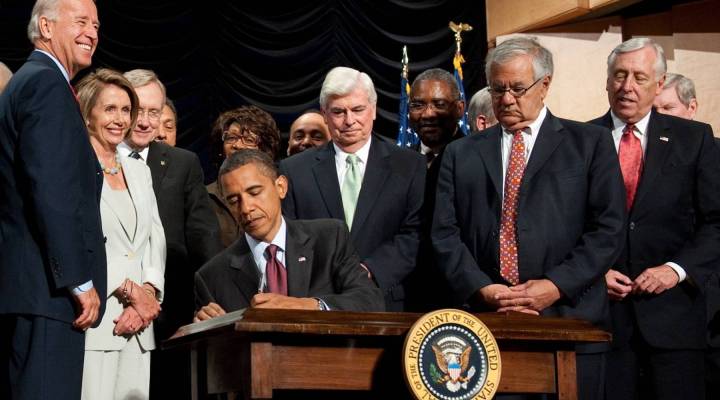 In the event of another financial crisis, the lawmakers behind one of America’s largest financial reform bills say the government would not get the political support it needs for a bailout.

Former Connecticut Sen. Chris Dodd and former Massachusetts Rep. Barney Frank — the co-authors of the 2010 Dodd-Frank Act, a law aimed at making banks safer in order to protect consumers and the economy  — told Marketplace that legislators wouldn’t agree to save failing financial institutions with taxpayer money like they did back in 2008.

“Not only politically could you not get away with what we were able to do in 2008, but legally you cannot do it,” Dodd said.

The Dodd-Frank Act, which President Barack Obama signed into law in 2010, two years after the financial crisis, requires banks to have more capital on hand and limits the risky bets banks can make with their own money. The law also created a playbook for unwinding banks when they go bankrupt and created the Consumer Financial Protection Bureau, an agency that collects consumer complaints and can slap fines on companies engaging in unfair practices.

In a rare joint interview, the two spoke to Marketplace host David Brancaccio about the crisis of 2008, how regulators handled it, the state of the banking system today and why they think Congress is done tinkering with Dodd-Frank.

Looking back on the government’s bailout program

In the midst of the crisis, Congress passed the Troubled Asset Relief Program, a $700 billion bailout package for banks that eventually was reduced to $475 billion under Dodd-Frank.

The money was doled out to banks to steady the markets and the financial system, which was teetering on the edge of an all-out panic. Critics saw TARP as a no-strings-attached gift to the banks, the very same institutions that had gotten the country into the crisis in the first place.

“I don’t think we ever did anything in my 30 years in the Senate as unpopular [as TARP],” Dodd said, “and yet, as important.”

However, Dodd thinks Congress and the George W. Bush administration fell short when it came to explaining TARP to the public.

“What we didn’t do well enough, and I blame the administration for a lot of this here, it always should have been a consumer, bottom-up approach to this thing,” Dodd said.  [It’s] about consumers and the country. “The language was always about stability of the institutions, and consumers kind of came in last.”

Frank added that the people in charge of pushing through TARP, like Treasury Secretary Henry Paulson, didn’t do enough to help people facing foreclosures.

“We told them do something about foreclosure, and [Paulson] refused to do it,” Frank said. “And that was my most serious regret.”

Despite the criticism of TARP, Dodd and Frank largely stand by their decision to vote for it. However, if America were to face another financial crisis, the former lawmakers said that Congress wouldn’t be able to execute another bailout — that’s because under Dodd-Frank, bailouts are no longer allowed.

But Neel Kashkari, who helped shepherd TARP and who is now head of the Federal Reserve Bank of Minneapolis, recently told Marketplace that if big banks are still so big and were to run into trouble today they would need to be bailed out again, leaving taxpayers on the hook. Frank disagreed, saying Congress would have to vote to allow another bank bailout, which is highly unlikely because the public would be against it.

“[It] totally misreads the politics of America,” Frank said.

Dodd pointed out that their legislation set up a system that allows for the “orderly dismantling” of an institution, so that another bailout wouldn’t be necessary. Under Dodd-Frank, the Federal Deposit Insurance Corp. would take over the failing company instead of letting it go into bankruptcy, and executives, directors and shareholders would bear the losses of the company.

After this interview, Marketplace reached out to Kashkari for comment.

“Just because Congress declares something to be true doesn’t make it true,” he said in an emailed response. “Congress could outlaw cancer. That’s not the same thing as a cure.”

The Tea Party and Trump: the aftermath of the financial crisis

In the years following the financial crisis, two political movements began gaining traction: the Tea Party on the right and Occupy Wall Street on the left.

Frank said he thinks they formed in reaction to the way Congress treated people undergoing foreclosures.

He continued, “Our problem was that the Tea Party registered to vote and got involved in primaries and took over the Republican Party. And the Occupy people smoked dope and had drum circles.”

Frustration over America’s political and financial institutions has led some to speculate whether the crisis paved the way for Donald Trump to become president.

But when asked, Dodd and Frank said there are other underlying problems in our economy that contributed to Trump’s victory.

Frank said that growth was good for everybody from the Great Depression through World War II, but it became a “two-edged sword” in the ’80s. While economic growth produced more wealth, that wealth was unevenly distributed.

“And someone comes along and promises that ‘I can make you great again,’” Dodd said.

The future of Dodd-Frank

Since Trump’s election, the president has pledged to “dismantle” Dodd-Frank. But during their conversation with Marketplace, Dodd and Frank expressed confidence that their legislation would stay intact.

Take the Consumer Financial Protection Bureau, which was created under Dodd-Frank. The watchdog agency has enforced penalties against financial institutions, most notably hitting Wells Fargo with a $500 million fine for its false accounts scandal.

Republicans have called the bureau a “rogue agency” with a leader who’s essentially an unelected “dictator.” Trump’s interim pick to lead the agency, Mick Mulvaney, has said he wants to cut off public access to the agency’s online database of complaints about financial companies. And last month, the bureau’s student loan ombudsman resigned over concerns that the White House doesn’t want to protect student loan borrowers.

However, Dodd and Frank pointed out that Republicans haven’t taken away any major powers from the bureau or its independence. The agency is funded automatically by the Federal Reserve, not Congress, and it’s still run by a single director.

“The next time a president gets in office who believes in [the agency], those powers are there. They have not been diminished going forward —  they’re not being used,” Frank said. “They haven’t put the consumer bureau to one test because the Republicans don’t want to vote on it.”

Other parts of the Dodd-Frank Act were rolled back earlier this year, though.

Republicans  — and dozens of Democrats  — voted to ease some restrictions on midsized banks, changing the threshold at which a bank is considered “too big to fail” from $50 billion in assets to $250 billion assets.

That means banks with assets between $50 and $250 billion will no longer have to undergo “stress tests,” which measures their ability to withstand another financial crisis. And now banks with less than $10 billion no longer have to comply with the Volcker rule, which limits a bank’s risky trading practices.

Dodd and Frank see the reform as tinkering around the edges.

“Chris and I were very much unbothered” by the change, Frank said. “I think what we now have is a confirmation that 90 plus percent of that law is going to remain on the books.”

The reason why so many Democrats voted for the rollback: backlash against the law from community banks, a group with political clout that has argued the regulations are too costly for them.

“The Democratic senators who pushed for that now feel totally secure in not having to support any other change and that there will be no further change to the law,” Frank said.

Going forward, Dodd and Frank argued that government should be focusing on areas like fintech and cybersecurity.

“Those are the issues that I think are on the cutting edge of the stability and soundness of our financial institutions,” Dodd said.

You can read the full interview transcript here and watch the full video of the interview below: