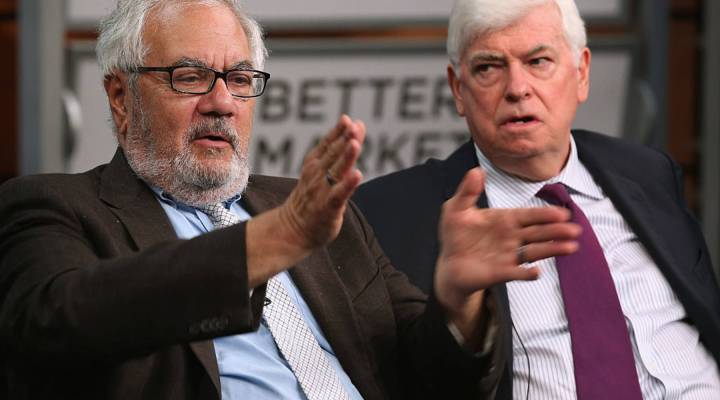 COPY
Former Representative Barney Frank and former Senator Chris Dodd talk about their hallmark and namesake legislation, the Dodd-Frank Wall Street reform law, on the fifth anniversary of the law at the Newseum on July 20, 2015 in Washington, DC.  Chip Somodevilla/Getty Images

Former Representative Barney Frank and former Senator Chris Dodd talk about their hallmark and namesake legislation, the Dodd-Frank Wall Street reform law, on the fifth anniversary of the law at the Newseum on July 20, 2015 in Washington, DC.  Chip Somodevilla/Getty Images
Listen Now

The transition team for President-elect Donald Trump issued a statement today saying the new administration will “be working to dismantle the Dodd-Frank Act.” That’s the big financial regulation reform law enacted after the economic meltdown and subsequent bank bailout.

With so much change coming, interest groups in the financial sector wasted no time. Paul Merski, a lobbyist for the Independent Community Bankers of America, was on the phone the very next day, working his contacts.

“We will be pushing an aggressive agenda for regulatory relief for the community banking sector,” Merski said.

Smaller community banks want relief from extra reporting requirements for mortgages and small business loans. Other banks want to modify rules requiring them to set aside capital for emergencies.

But there are also people worried about negative effects of dismantling Dodd-Frank. Robert Jackson, Jr., helped write the law as an attorney at the Treasury Department. He now teaches law at Columbia University. He said without strong regulations to govern failing mega-banks, the next administration could face another financial crisis.

“What I’m hoping,” Jackson said, “is that they don’t go so far that they find themselves in a situation where we’re on the brink of economic catastrophe and the only choice is to bail out the banks.”

Yes, he said, some financial regulation will be relaxed, and some reforms that had been planned will be scrapped.

“There was a huge push for having corporations disclose their political donations. That’s not happening,” said Groshans. “There’s this whole issue about some type of limitation on executive pay. That’s out the window.”

But Groshans also said Dodd-Frank isn’t likely to be completely overturned, at least not right away, because Republicans’ majority in the Senate isn’t big enough to prevent Democratic filibusters.