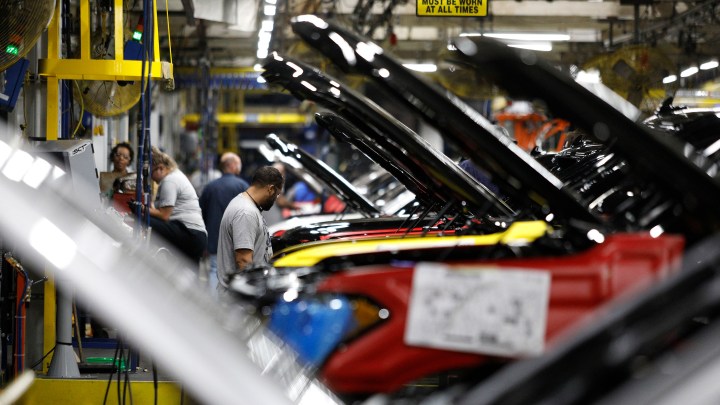 COPY
The Ford factory in Louisville, Kentucky, in 2017. The plant recently had to shut down due to a shortage of semiconductors. Bill Pugliano/Getty Images
COVID-19

The Ford factory in Louisville, Kentucky, in 2017. The plant recently had to shut down due to a shortage of semiconductors. Bill Pugliano/Getty Images
Listen Now

In Louisville, Kentucky, Monday, a Ford factory that assembles the Escape SUV began a weeklong shutdown because it doesn’t have enough semiconductor supplies. It has become the latest automaker to feel the impact of a global chip shortage.

Jeep, Honda, Toyota and Volkswagen are among the brands that have also reduced production, citing a scarcity of semiconductors, which are also at the heart of the supply chain for consumer electronics.

“Everyone building videogames to phones to laptops needs those same chips,” said Joseph McCabe, president and chief executive of AutoForecast Solutions. “And when you’re a chip manufacturer, you’re gonna go and satisfy your larger customers first. Consumer electronics are exponentially larger on a global basis than vehicle builds.”

In vehicles, microchips go into everything from engine control modules to infotainment systems to electronic stability controls.

The thing is, the makers of chips that go inside consumer electronics and vehicles can only crank out so many.

“A lot of the stuff that uses the most advanced manufacturing is made at companies like TSMC out in Taiwan, and the factories are just full,” Stacy Rasgon, managing director and senior analyst at Bernstein Research, said.

He said eventually, semiconductor supplies will catch up to the automakers’ production cycle.

Until then, carmakers will likely pause production of their low-profit models and save valuable microchips for others on the assembly line, said Alan Baum, principal at the automotive research firm Baum and Associates

“The Ford Escape is not doing particularly well right now,” Baum said. “And so Ford made the judgment to take that facility down for a week, because they could afford to do that.”

Baum warned that if the chip shortage begins to hurt production of financial moneymakers like Ford’s F-150 pickup, then carmakers will be in a real jam.