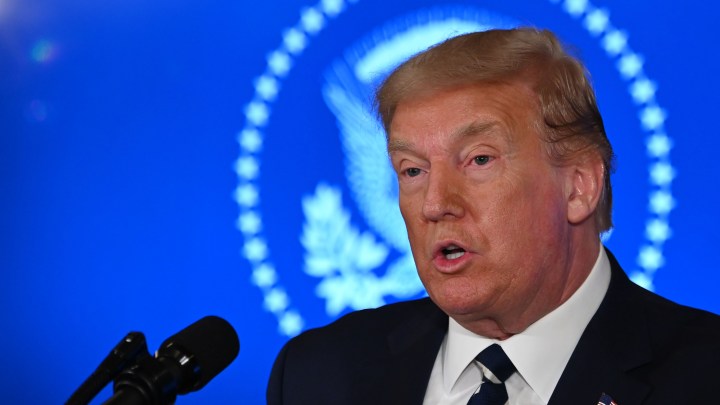 President Donald Trump signed executive actions over the weekend in the name of tiding people over during a pandemic at a time that Congress can’t agree on a longer-term package of aid.

Trump directed limits to evictions, and student loan payments can be deferred until the end of the year. Trump extended extra unemployment benefits to $400 per person, shifting some of that payment burden onto states, though it’s unclear if states will comply at a time money is so tight. And there’s a temporary cut in payroll taxes to put cash into the pockets of people who do have work.

That, too, is complicated. Marc Goldwein, senior policy director for the Committee for a Responsible Federal Budget, spoke with “Marketplace Morning Report” host David Brancaccio and the following is an edited transcript of their conversation.

David Brancaccio: Help me with this. I want to ask you about the cut in payroll tax that the president has ordered up in the name of pandemic relief. How are you reading this? It’s a cut now, but unless Congress acts, people would eventually have to pay what is due?

Marc Goldwein: That’s right. The president supports the cuts to the payroll tax, but what he’s been able to do by executive [action] is just delay the payment. And so what he said is that any payroll taxes that are due over the next few months can be paid on Dec. 31, which means that, ultimately, the bill will still come due.

Brancaccio: Now, Congress could act as part of whatever bigger thing they may or may not do.

Goldwein: They could. Congress can always act, and what the president is trying to do is put their feet to the fire and say, well, I’m going to cancel the payroll tax for now anyway, so if you don’t cancel it permanently, there’s going to be a big balloon payment. However, I think a lot of employers are probably just going to keep withholding that payroll tax under the assumption that Congress does not act to cancel it permanently.

Brancaccio: Oh, so we might actually not see this because the employers are like, there’s too much confusion here. Let’s just keep it status quo until we get some clarity.

Goldwein: That’s right. There’s a lot of ambiguity to employers as to whether they’re even allowed to reduce the withholding, let alone whether it’s the wise thing. I think the last thing an employer wants to do is withhold the entirety of your Christmas paycheck because you owe payroll taxes for the prior four months.