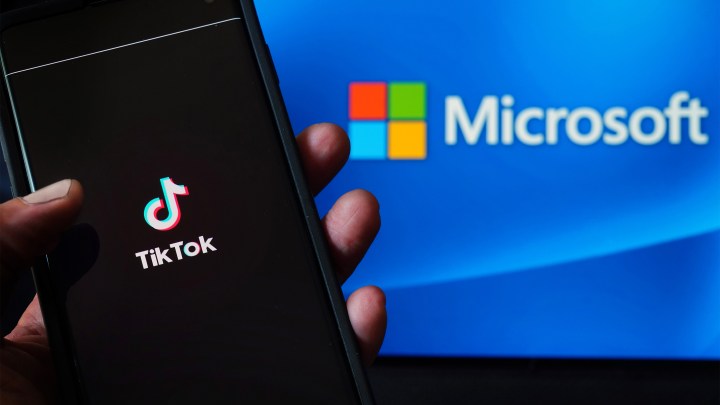 COPY
Microsoft's potential acquisition of TikTok could put it in the leagues of Facebook and YouTube. Photo Illustration by Cindy Ord/Getty Images
TikTok

Microsoft's potential acquisition of TikTok could put it in the leagues of Facebook and YouTube. Photo Illustration by Cindy Ord/Getty Images
Listen Now

It’s been a rough couple of days for Chinese social media company TikTok.

Here’s a recap of the drama: Microsoft has been in talks to acquire TikTok in the United States, Canada, Australia and New Zealand. President Donald Trump announced Friday he would ban TikTok over security concerns.

And, in a quick reversal Monday, Trump gave Microsoft the green light.

TikTok is the wildly popular social media platform where users upload snappy videos, like this one of singer Jennifer Lopez dancing.

It’s been viewed almost 2 million times. In the U.S. alone, TikTok says it has over 100 million users.

“During the pandemic, the numbers associated with people flocking to TikTok and utilizing the app have just grown exponentially,” said Ari Lightman, a professor of digital media at Carnegie Mellon University. “We haven’t seen this kind of growth since Facebook.”

In the tech world, Microsoft is seen as the serious company that does grown-up stuff, like office software, Skype and LinkedIn. Which is why when e-marketer analyst Debra Aho Williamson heard it wanted to purchase TikTok, “I was like, ‘What? Microsoft and TikTok?'”

“Facebook maybe would be a better fit, but because there are so many antitrust concerns, it’s not really possible for a company like Facebook to acquire it,” she continued.

But now, with the administration’s blessing, Microsoft can. TikTok could place Microsoft in the big social media leagues, with the likes of Facebook and YouTube.

“Some young people are actually voters, and they really enjoy TikTok,” he said. “The idea that they can’t see it because he’s banned it would not resonate well with them as voters.”

Microsoft has said it expects to continue discussions until Sept. 15 — plenty of time to upload your latest dance videos.