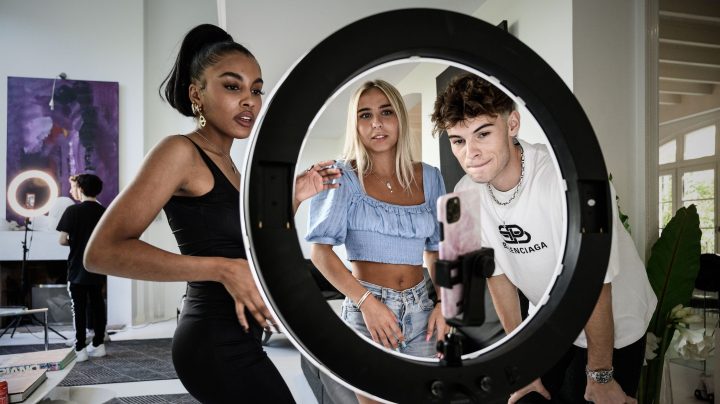 The great mascara sellout of 2020 started with one video from a little-known TikTok creator named Jess. She’s in what looks like her bedroom, testing Maybelline’s Lash Sensational Sky High mascara. The video looks like a spontaneous product review, raw and unpolished — she even accidentally smears makeup all over her eyelid. But her lashes look impressive, and soon other TikTokers are testing it out too.

Today, videos with the hashtag #skyhighmascara have more than 650 million views on the platform. Many of the videos other users have made feature that original TikTok by Jess. And despite what it looks like, she was not some random person reviewing a random product. Jess was one of a few hundred creators the company paid for content.

“Oftentimes it’s really letting them have the product, making sure that they know the key features and benefits about it, and then you kinda have to leave it to the creator to showcase the product in a way that their followers are going to resonate with,” said Tina Liu, a marketing director at Maybelline.

Trends on TikTok and Instagram come and go. There are viral dances, challenges and product reviews. When a certain type of curling iron, cleaning supply or condiment catches on, the brands and businesses that make and sell those items have a limited amount of time to capitalize on the short attention spans of social media users.

Like a lot of brands, Maybelline has been spending more on social media marketing each year, which means that increasingly what you see on TikTok or Instagram aren’t spontaneous trends, but intentional advertising.

“A lot of times we think it’s random luck or chance,” said Jonah Berger, a marketing professor at Wharton. “We think we have to catch lightning in a bottle. You know, some companies get lucky, and some companies don’t.”

Sure, TikTok marketing looks different from TV ads and magazine spreads. But Berger said its unpolished appearance is part of what makes it so appealing. Virality also depends on whether the content feels useful, the product is accessible and the video is easy for other users to copy.

“Suddenly now you’re a part of an ongoing discussion that’s happening online. And so in a lot of cases, once something gets a little bit of traction, then other people are doing their own riff on it,” he said.

Virality is hard to plan for, even if you’re a big company like Maybelline. Its mascara campaign exceeded expectations; you might say sales were Sky High. Over the first few months, the product sold out four times at the beauty chain Ulta.

“We were meeting almost every day at that point just to try to find solutions,” Liu said of the supply chain crunch. Solutions included shifting some of their manufacturing lines to make more mascara. And thankfully for Maybelline, it manufactures its mascara in the U.S., so the product didn’t get stuck on some cargo ship in the middle of the ocean.

But sometimes, virality is not capturable, like that moment in 2021 when, for some reason, everyone on TikTok was baking feta cheese.

“It was a feta cheese surprise,” said Benoit Breal, the owner of Saxelby Cheesemongers, a wholesaler that supplies around 80 stores and restaurants in New York City. “We suddenly got a lot of orders for feta in the middle of winter.”

Normally, feta is popular during the warmer months, when people put it on fresh salads with cucumbers and tomatoes. For Breal, demand was mysteriously 10 times what it usually is. He was confused.

“And you know, it takes a few days until we were able to understand what was going on, and we missed most of it,” he said.

Breal finally saw the trend on the news, but by the time he coordinated extra orders with his suppliers, he missed a whole week of the feta craze. A couple of weeks later, it was over.

Unfortunately, Breal said, that’s just the nature of his business. Social media trends can expire as fast as some of the cheese he sells.