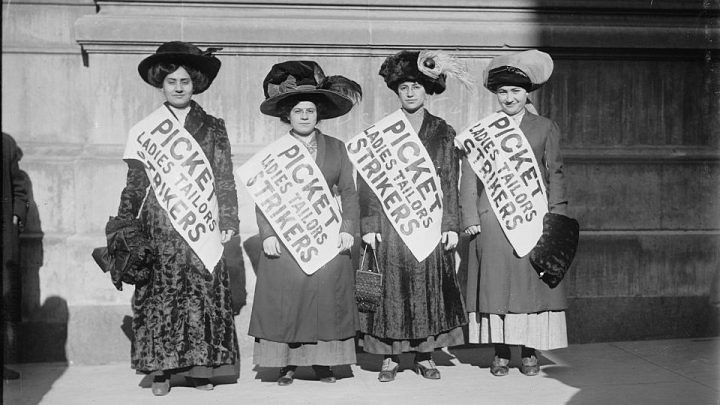 COPY
Women strikers on a New York City picket line during the Uprising of the 20,000, a garment workers strike of 1909 and 1910. Bain News Service
Workplace Culture

Women strikers on a New York City picket line during the Uprising of the 20,000, a garment workers strike of 1909 and 1910. Bain News Service
Listen Now

These are unprecedented times for American workers. Tens of millions have lost jobs, millions more have been cooped up at home for months with kids while others face heightened dangers performing work that once seemed ordinary. Warehouse and grocery workers have held protests to demand better safety and hazard pay, while others have rushed to fill hundreds of thousands of temporary jobs in those same risky industries.

Whether this moment will end up strengthening or weakening the power of workers is still unclear, so we took a look back into our history for answers.

Recessions typically aren’t a great time for unions. You only have to look to the Great Recession for proof.

Labor sociologist Ruth Milkman at City University of New York pointed out that while Barack Obama had just been elected president with a labor-friendly platform, unemployment had soared.

“The conventional wisdom among economists is that the best time for labor organizing is when unemployment is low,” she said.

Organizing is risky, more so when jobs are scarce. And indeed, union membership continued its decades-long decline during the Great Recession. Public approval of unions bottomed out.

But in this recession, we’ve lost three times as many jobs in just the last few months.

“This is on so much grander a scale,” said Milkman. “And that’s more like the ’30s. That’s the only time in the 20th century when the crisis was this deep.”

It was the severity of the Great Depression that helped give rise to the biggest surge in organizing this country has ever seen.

“There are some very important lessons to be learned from what was definitely an uphill battle in the 1930s,” said Lizabeth Cohen, a historian at Harvard University and author of “Making a New Deal: Industrial Workers in Chicago, 1919-1939.”

The union movement was all but dead at the beginning of the Great Depression, said Cohen. Membership was, like today, at historic lows. But the economic pain of the Depression was so deep that it unified Americans in anger, especially the masses of unemployed.

“There were hunger marches in the streets of many American cities,” said Cohen.

For the first time, workers were granted the right to organize and employers were compelled to negotiate. Cohen said the mid-1930s saw a surge in union membership.

“Striking became very important, as did the threat to strike,” she said. “Workers were really flexing their muscles.”

Cohen said parallels between then and now have their limits. For one thing, political leadership is less friendly to unions now.

But it’s not just economic calamity that today’s workers are facing, it’s a health crisis, which has echoes of an even earlier period.

“In 1911 it was incredibly dangerous to go to work in America,” said author David Von Drehle. “Miners had mines cave in on them, people died in railroad accidents, they had pots of molten steel dumped over them.”

Workplace tragedies were common at the turn of the century and mostly ignored, he said, until 1911, when a fire swept through the Triangle garment factory in New York, killing 146 workers — mostly young, immigrant women.

In his book, “Triangle: The Fire That Changed America,” Von Drehle chronicles the conditions that made it a turning point.

In 1909, garment workers in the city, including those at the Triangle factory, walked off the job in a massive strike, calling for better pay, shorter hours and safer conditions.

“This was the first strike in American history that was primarily a women’s strike,” he said.

The movement captured the imagination of the city, particularly wealthy society women who joined the picket line, though the gains of the strike were modest.

“And then, suddenly there’s something that causes a leap forward,” said Von Drehle. The deadly fire galvanized the burgeoning movement for better working conditions and led eventually to national reforms.

Today, workers are again invoking union rallying cries from the past.

In April, nurses protested the deaths of their colleagues from COVID-19 in front of the White House, and quoted early-20th-century labor activist Mother Jones: “Pray for the dead and fight like hell for the living.”