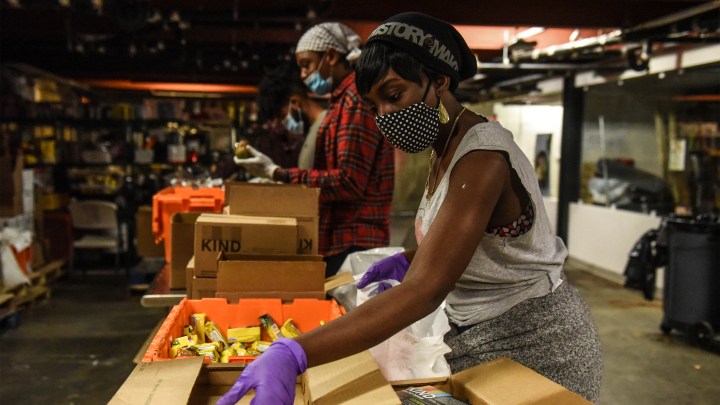 Father Edward Mason remembers when he realized COVID-19 was going to be devastating to his community in the Brownsville section of Brooklyn, New York City. It was back in mid-April. In the local public housing complex, a lot of seniors weren’t answering their phones. “And when they went into the apartments, they found 10 seniors who had passed away,” he said. “Alone in their apartment. Predominantly Black, with a heavy Latino influence as well.”

Black and Latino people have been three times more likely to get infected by COVID-19 than their white neighbors and twice as likely to die once they get infected, according to Centers for Disease Control data obtained by The New York Times this month. Among the many reasons for this nationwide disparity is that Black and Latino workers are much more likely to have jobs that can’t be done from home — essential jobs like public servant, bus driver, health care attendant or grocery clerk.

“We’re calling them essential workers,” Ohio State University economics professor Trevon Logan said. “But I guarantee you in February we would’ve called these people the working poor. And there’s a reason why they are tethered to their jobs: They tend to have limited amounts or availability of sick care and sick leave. And their wages are such that if they are not working, they are literally not one paycheck away from being destitute, they are half a paycheck away from being destitute.”

Brownsville is reflective of that reality. It’s 80% Black, and in May the infection rate was more than twice the New York City average, according to state testing data. The virus has killed dozens of Mason’s parishioners. “Two large sectors of employment for our community, for the men it’s grocery stores, for the women it’s home health aides and in the health field,” Mason said. “So you had large segments of our population, most of whom live in apartment buildings, high-density buildings, having to go to work, every day.”

Audra Palacio, 41, is one of those essential city workers. She’s with New York Homeless Services. Last week, at her parents’ house, her mom was frying fish for lunch in the kitchen, while her dad watched the news. Palacio remembers going to work with people who were getting sick. She asked for guidance from her employers and got none. By late March, she was sick too. “The body aches. It’s just like something took over my body and I could not even move. Like it took over my chest,” she said. “And I had to stop. I could not function. I had to call my supervisor and tell her, ‘I can’t.’ “

The way Palacio describes it, COVID-19 came into Brownsville like a wildfire. Soon, her entire family got it, including her mom and her dad, who is nearing 80.  Her next-door neighbor fell into a coma. Her uncle died.

Palacio said it wasn’t just the fact that she got infected. It’s the care she received that makes her upset. “I remember going to the health clinic in this neighborhood and being told, ‘If you are feeling sick, why did you come here? You wanna get me sick? You wanna get other people sick?’ And we were scolded. An essential worker like myself.”

Some essential workers say treatment like that made them feel disposable. Carmen has worked at a New York hospital for nearly 20 years, in close contact with patients. She asked Marketplace to not use her last name; she’s worried about employer retaliation.

We met on her stoop in Brownsville, on a hot summer day, and she talked about all the people who died there in the last few months. “We lost people in the supermarket. We lost people who used to sell food outside,” she said. “They passed away. Because they were letting the people die.”

Carmen is in her 50s. At the end of March, she asked for some time off, since her husband has a heart condition that puts him at high risk for COVID-19 and she was being exposed every day. “They didn’t approve me to stay home. I asked for time off. They didn’t approve it.” She eventually got sick and said it was very hard to find testing.

It wasn’t just her. Erasma Beras-Monticciolo, executive director of the local nonprofit Power of Two, said it took a while for local clinics to offer COVID-19 tests. “The community, we had to petition for the tests,” she said. “And if you are sick, how are you going to get there?”

She wasn’t surprised. “I don’t want to say it was intentional. But I see it as neglect. Historical neglect of our community. It has always experienced this.”

When Carmen, the hospital worker, finally was able to access a test, it came back positive. She was told to go home. “I had a big group at church,” she said. “So we prayed on the phone. We prayed twice a day. ‘Ten piedad de nosotros, y del mundo entero. Have mercy on us, and the whole world.’ “

Carmen eventually recovered from the virus and is back at the hospital now — working.