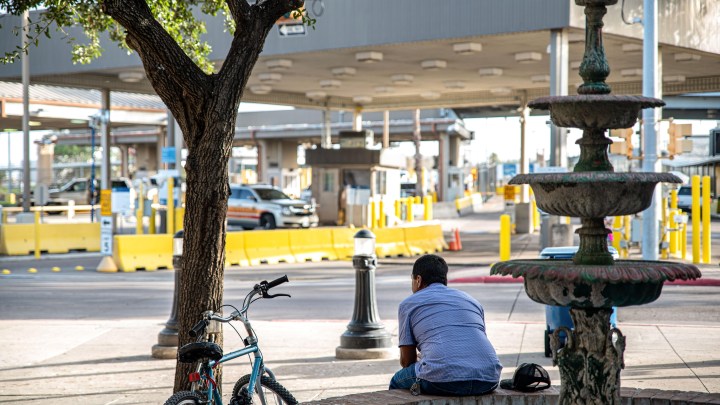 COPY
A man sits on a fountain just across the street from the border crossing in Brownsville, Texas, on June 29, 2019. Sergio Flores/AFP via Getty Images
COVID-19

A man sits on a fountain just across the street from the border crossing in Brownsville, Texas, on June 29, 2019. Sergio Flores/AFP via Getty Images
Listen Now

Hundreds of thousands of people cross back and forth between the U.S. and Mexico every day for a number of reasons: maybe they have a job on one side and live on the other, maybe they have family that needs attention. You don’t think of a border crossing as a mass gathering, but it essentially is.

Marketplace’s Andy Uhler is in Brownsville, Texas, trying to figure out what’s changed at the border as a result of COVID-19. He spoke with Marketplace’s Sabri Ben-Achour about what he’s seeing. The following is an edited transcript of their conversation.

Andy Uhler: I spent [Wednesday] hanging out at the bus stop just a few yards from the border. It’s where I ran into Juan Benevidez. He lives in Matamoros but has business partners on the Brownsville side, and he’s meeting up with them. I asked him if he was concerned about COVID-19 and he says, personally, he’s trying to make sure to wash his hands and pay attention to the news, but people in Matamoros, and the government officials, there don’t seem to be all that concerned. He says everyone is continuing to go to work, public transportation and movement of people is all the same. He says everything is the same and nobody seems all that worried about it in Mexico. And you can see that at the border, too.

Sabri Ben-Achour: So, what about people staying home and not going to work, like so many companies are doing here in the United States?

Uhler: Right. I kept asking folks at the border about that. And almost to a person, they told me that’s not an option. What’s interesting is that one woman I spoke with, Maria Guadalupe Contreras, who also lives in Matamoros and is visiting family in Brownsville, said the only people she knows who are not going to work anymore are people who are in the health care industry.

She says she has a friend who works at a health care center in Matamoros. Those are the people who have rules about not coming in. Regular people, no.

She says she knows a few people in Matamoros who are on salary, but nobody is asking them to work from home. And nobody is treating the border as a large gathering place, which it undoubtedly is. Everyone I spoke with said nobody with Customs and Border [Protection] asked how they were feeling, if they had any health concerns or anything. They just wanted to see paperwork and make sure they had a legal right to work in Brownsville.