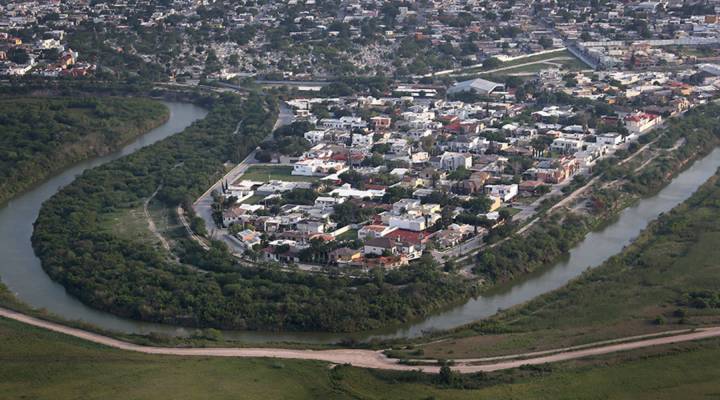 COPY
The Mexican border town of Matamoros is on the Rio Grande, across the U.S.-Mexico border near Brownsville, Texas. John Moore/Getty Images

The Mexican border town of Matamoros is on the Rio Grande, across the U.S.-Mexico border near Brownsville, Texas. John Moore/Getty Images
Listen Now

In Brownsville, Texas, the neighboring city Matamoros, in Tamaulipas, Mexico, is just a 10-minute walk away. As the Trump administration’s immigration policy causes tension nationally, Brownsville’s local economy feels its effects first hand. Marketplace’s Andy Uhler spent some time on both sides of the border and talked with host Kai Ryssdal about what he saw. The following is an edited transcript of their conversation.

Kai Ryssdal: While the courts and the Trump administration and maybe Congress, who knows, sort out whatever this policy is or is not going to be, our slice of this is — and it’s worth a mention here — is that that border is central to so much stuff that happens in the American economy.

Andy Uhler: Well, and it’s also one of these borders where you talk about it as, you know, a place where you have to cross. But it’s so fluid down in Brownsville and Matamoros, which is literally a 10 minute walk across a bridge from Texas. The people there when you talk to them don’t think of it really as a sort of border except that you have to show your passport to get to the next spot. They have jobs there. They may live in Brownsville and work in Mexico or vice versa. It’s not this sort of border as we think about it or certainly the administration thinks about it.

Ryssdal: You obviously brought your passport with you. You took a walk down across that bridge, right? That 10-minute walk?

Uhler: I did. And I ended up meeting up with a guy who’s running for basically vice mayor of Matamoros. His name is Francisco Galvan. And he told me, “Look, it’s not necessarily just this administration cracking down on illegal crossing and detaining everybody that tries to cross, it’s affecting people that actually have a right to work or live on both sides.”

Francisco Galvan: The requirements of the American government has been tougher on income and how many years have you been on the job, and it’s getting tougher and tougher and tougher. So people who have had visas for 10 years or the time the visas are have to be renewed, they’ve been denied.

Ryssdal: So let me ask you this, though, what did he have to say about if this doesn’t get fixed, if it doesn’t get solved?

Uhler: Well, that’s the thing is that he had such an interesting sort of perspective on Mexico’s role or Mexico’s ability to just say, “You know what, I know we’re neighbors and we have these existing ideas, but if you’re going to blow up NAFTA and if you’re not going to let us cross sort of freely,” he said, “look, Mexico is going to figure it out.”

Galvan: And the only one who is going to be affected is American economy, period. Us as Mexico, if we are forced, we are going to start to try, to start looking somewhere else in order to be accepted and welcome.

Uhler: I mean, the difficulty there is going to be so much trade happens between Texas, New Mexico, California, Arizona and Mexico. That’s going to be tough.