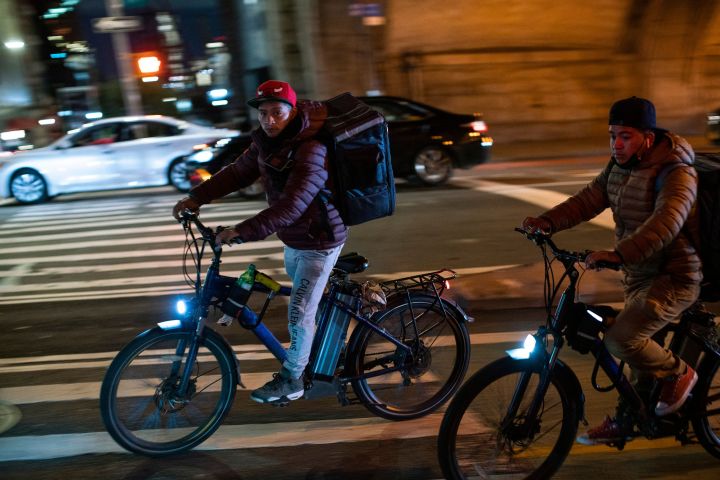 COPY
New York City is considering banning e-bikes from public housing after a number of fires have been attributed to their rechargeable batteries. Eduardo Munoz/AFP via Getty Images

New York City is considering banning e-bikes from public housing after a number of fires have been attributed to their rechargeable batteries. Eduardo Munoz/AFP via Getty Images
Listen Now

To make money as a delivery worker in New York City, you have to be fast. And if you want to be fast, a car is not the way to go in a city where there’s a lot of traffic and not a lot of parking. Instead, most delivery workers now use electric bikes.

“The e-bike, you can save some money,” said Mahfuzur Rahman, who works full time, seven days a week, delivering food for DoorDash and Uber Eats in Brooklyn. “You don’t have to buy gas every day, you don’t have any oil changes or anything. And so e-bike is kind of easier for everything.”

But the city is now considering banning e-bikes and their rechargeable lithium-ion batteries from public housing after a number of fires have been attributed to batteries overheating and exploding. If the ban happens, some workers and advocates are concerned that private landlords might also follow suit.

“I’m obviously sympathetic to the concerns of the city, not wanting a lot of fires, but it seems like possibly an overreaction,” said Andrew Wolf, a research fellow at the Workplace Justice Lab at Rutgers University and a lecturer at the School of Labor and Urban Studies at the City University of New York. “It could potentially increase the cost for these workers if they’re going to not be able to take their bikes home and are going to have to instead pay for a garage spot.”

E-bikes are the most affordable, practical option for many delivery workers, but they’re still expensive. Rahman’s bike was $1,800, and they can easily run $3,000 to $5,000 or more.

Because they are so expensive and in demand, they’re also a target for thieves. Many delivery workers have had their bikes stolen; some have been attacked and hurt or killed.

“It becomes harder to justify an extremely expensive upfront purchase for maybe the higher-quality things when you don’t even know if you might be the victim of theft,” said Juan Restrepo, senior organizer with the nonprofit Transportation Alternatives and a former delivery worker.

“So there might be a little bit of hedging involved in buying cheaper batteries and a cheaper bike, not knowing that it might result in a fire.”

High-end e-bikes are generally certified as meeting certain safety standards, but many cheaper ones aren’t necessarily.

“A lot of what you actually see on the street, and a lot of what’s being sold in stores across the city and sold online are of unknown origin,” said Melinda Hanson at Electric Avenue. “They’re cobbled together with different parts, which is where the trouble can arise, because sometimes they’re just actually not designed to work together. You know, the power cord can pull too much power to the battery.”

If a battery is damaged or left charging for too long, it can overheat and explode.

But there’s really no way for delivery workers to tell what’s safe and what isn’t. Even if there were, Hanson said, “the problem is, of course, the folks who are using these for their jobs, they don’t typically tend to be very high income. The difference of $500 that could get you from a lower-quality bike to a higher-quality bike is often out of reach.”

Around 3 p.m. on a recent Tuesday, seven or eight delivery workers are sitting on their e-bikes and scooters in the shade across from a Shake Shack in Brooklyn, looking at their phones.

Mahfuzur Rahman’s phone dings and an order pops up. It’s over 2 miles away, and he’d only make about $5, including tip, for the half hour or more it would likely take to go wait for the food to be ready and make the delivery. He rejects it.

“It doesn’t make no sense to go up there right now,” he said. “Because every time you go, you gotta spend a lot of energy from the battery.”

Batteries are another big expense for delivery workers who ride e-bikes. Rahman’s only last two or three hours, so to work an eight- or 20-hour day, he needs to own at least two, so that one can always be charging.

He also pays someone $50 a month to charge his batteries in their basement, near where he works. In that basement, he said, there are about 100 e-bike batteries charging at any given time.

“There’s an underground economy benefit from this,” said Hildalyn Colón, director of policy and strategic partnerships for an organization of app delivery workers, Los Deliveristas Unidos.

That huge, informal economy has sprung up to support delivery workers because “there’s no infrastructure in New York City to store your bike safely or even to charge your bike safely,” Colón said.

Los Deliveristas Unidos is pushing the city to create hubs where delivery workers can go to charge their batteries, as well as places for them to store their bikes safely too — whether or not the city bans the bikes and batteries from public housing.

“We don’t want this informal economy,” Colón said. “We’re talking about our workers’ lives and safety.”

The organization is in the process of trying to build its own hub. In the meantime, its office in Brooklyn has become an unofficial place workers can come to charge their batteries when they’re nearby.

But with at least 65,000 delivery people working all over the city and most riding e-bikes, Colón said a lot more charging and storage is needed all over the city. The government is encouraging people to buy electric cars and investing in that infrastructure; workers and advocates say the same should happen for e-bikes.

“This equipment and this technology is here to stay. Not only is it good for everybody, more accessible for people, it also impacts our climate,” Colón said. “So we definitely want to make it work.”