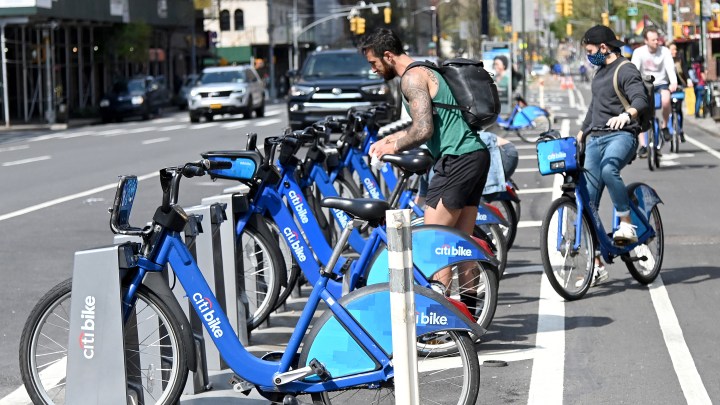 COPY
Bike sharing is cheaper to subsidize for the government than public transit or car infrastructure, experts say. Above, a bicyclist wipes down a Citi Bike before riding in April 2020 in New York City. Jamie McCarthy via Getty Images

Bike sharing is cheaper to subsidize for the government than public transit or car infrastructure, experts say. Above, a bicyclist wipes down a Citi Bike before riding in April 2020 in New York City. Jamie McCarthy via Getty Images
Listen Now

Transportation accounts for 29% of greenhouse gas emissions in the United States, and while electric vehicles are in our future, the infrastructure will take years to roll out.

So let’s take a look at a piece of infrastructure that’s already in place in many cities: bike-share programs. A new paper in the urban policy journal Cities says bike-share travelers in New York City saved 493 tons of emissions over four years.

Almost 500 tons of emissions saved isn’t a lot if you compare it to how many tons of carbon dioxide the average car emits a year — 4.6 metric tons, according to the EPA.

The environmental benefits of bike sharing go way beyond basic emissions numbers, according to Ralph Buehler, who researches sustainable transportation at Virginia Tech. For instance, in Washington, D.C., “people actually say they have gotten rid of a car or their second car because they now have bike-share,” he said.

Studies also show bike-shares encourage people to use public transportation; they ride them to bus and subway stops.

“So it facilitates a car-free or a car-light lifestyle because it’s one of these mobility elements,” Buehler said.

Success can also be measured by ridership numbers. Milwaukee’s nonprofit bike-share, called Bublr, averages about 80,000 trips a year, said Bublr Executive Director James Davies. He would like to see that number break 100,000. The pandemic has challenged that, he said, because one-third of riders are college students and office workers.

That cuts into the third measure of success: finances. One-third of Bublr’s revenue comes from rides, while the rest is made up of corporate sponsorships, grants and local and federal funding.

“So it’s fairly cheap for a city or the state to subsidize these. Cheaper than, for example, subsidizing public transit,” Noland said.

And even cheaper than subsidizing infrastructure for cars.