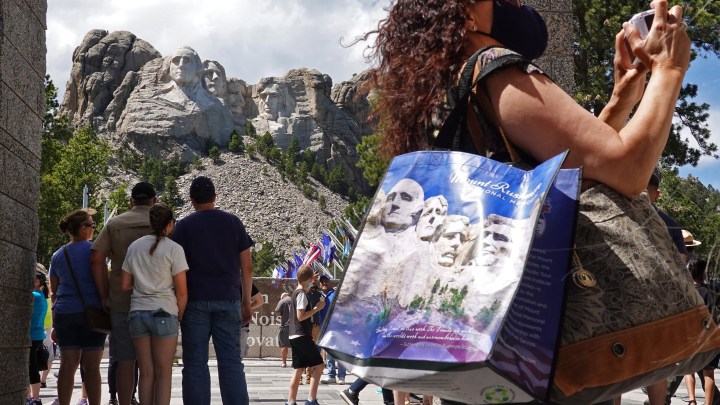 This weekend traditionally marks the beginning of summer vacation season. It’s the moment when a lot of tourist destinations in the U.S. start to see crowds. And when folks who work at tourist attractions — and hotels and restaurants near them — start getting busy.

The Black Hills region of South Dakota is dotted with those kinds of places. We checked in with the people who work there to find out how they’re getting ready.

The Black Hills are known for Mount Rushmore, the Crazy Horse Memorial, the gold rush city of Deadwood. And for Reptile Gardens, the world’s largest reptile zoo, according to the Guinness Book of World Records. It has lizards on display and alligators you can feed.

“There’s also the tortoise yard, with our giant tortoises that the people can pet,” said John Brockelsby, head of public relations. His father started the business 84 years ago.

“We started four years before the completion of Mount Rushmore,” Brockelsby said.

He’s expecting huge crowds this summer — which is great, because it’s expensive to run a zoo and “last year, of course, we lost money,” Brockelsby said.

“I mean, of course, it’s Memorial Day weekend, [and] everybody has a weekend off. But I haven’t seen numbers like this before, and I’ve been here 13 years,” he said.

The demand is overwhelming for some businesses.

Carrie Gerlach owns Black Hills Adventure Tours. Her kayaking, hiking and biking tours are sold out for the next three weeks. And she’s had trouble getting her hands on enough kayaks and bikes.

“So with the kayaks, I’ve just been kind of resorting to Facebook Marketplace,” she said. “I’ve also gone to local pawn shops and looked for people that want to sell bikes.”

Gerlach also books hotel rooms and cabins for her customers.

“And this year, I’m running into a situation where everything is sold out,” she said.

The crowds are a complete 180 from a few months ago. Jay Ringelspaugh is marketing director for Tatanka: Story of the Bison, a museum about the relationship between bison and the Lakota and Great Plains people.

“As the marketing director, last year I felt like I was crawling on my hands and knees trying to beg people to come. And this year, I’m like, ‘Um, if you could just not on certain days, that would be great,'” Ringelspaugh said, laughing.

That’s how quickly this economy has changed.