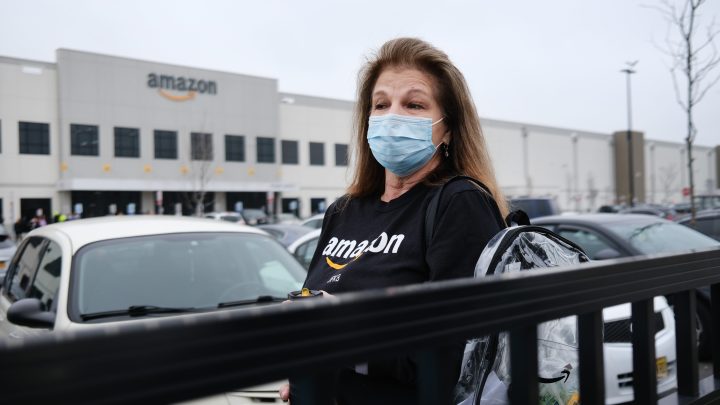 Pay bumps for essential workers at companies like Amazon, Kroger and Rite Aid are getting rolled back this month, while Target is extending higher wages through July 4. The pay increases are often dubbed “hero pay” or hazard pay — a recognition that the work of grocery store clerks and warehouse pickers has taken on new dimensions of danger in the pandemic. Workers are fighting to keep their bonuses in place, saying that the danger hasn’t gone away. But the labor market could complicate demands for higher pay.

Before the pandemic, Camilo Gutierrez was a server at a Yard House restaurant in Miami. In late March, as lockdowns shut dining rooms, he had his hours cut to zero. He wasn’t really sure if he’d qualify for unemployment benefits.

“Rent was still due, my bills were still due,” he said. “So I tried looking online and saw that Amazon was hiring, and they just gave me the job.” He’s been working as a delivery driver for the past month.

And there are millions more people in similar positions. Andrew Chamberlain, chief economist with the job site Glassdoor, said he’s seen a surge of interest in grocery, warehouse and delivery jobs from workers in hard-hit industries like hospitality.

“That weakens the pressure on employers to have to pay higher pay or hazard pay,” he said. “Definitely the more unemployed workers you see in the economy, the less bargaining power workers tend to have,” even though the jobs are considered risky.

Atif Siddiqi, CEO of the employee-benefit platform Branch, said a survey of hourly workers the company conducted in late March found most had lost hours or their jobs, but more than half were reluctant to apply for new work “because of fear of exposure and of safety concerns.”

According to the Branch survey, just 36% of hourly employees had applied or had plans to apply for a new job. But even a small share of the millions of unemployed is still a lot of willing people.

Amazon and Walmart had no problem filling hundreds of thousands of new positions in just a matter of months.

But that was during the period those companies were offering more generous pay, said AnnElizabeth Konkel, an economist with job site Indeed, who’s been tracking searches for these essential jobs.

“There was an initial surge of job-seeker interest,” she said. “And then it really has dwindled off and is now lower than its pre-COVID-era rate.”

If lower wages bring a drop in applications or greater turnover for these jobs, she said there could be an opening to demand better pay despite high unemployment.