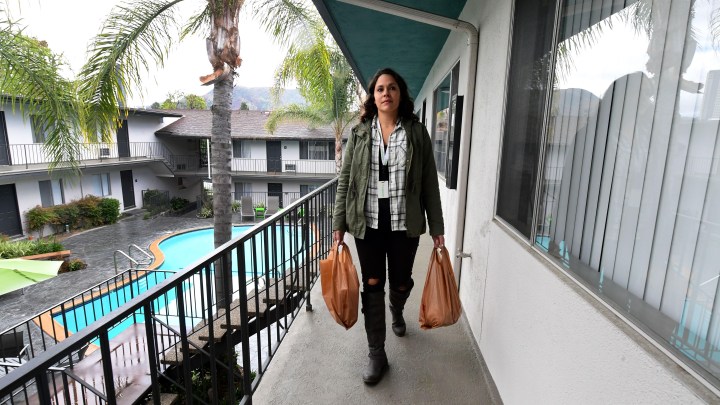 COPY
Instacart employee Monica Ortega holds bags of groceries she picked up from a supermarket for delivery to a customer on March 19, 2020. Frederic J. Brown/AFP via Getty Images
COVID-19

Instacart employee Monica Ortega holds bags of groceries she picked up from a supermarket for delivery to a customer on March 19, 2020. Frederic J. Brown/AFP via Getty Images
Listen Now

Workers at an Amazon warehouse in Staten Island, New York, plan to strike Monday around 12:30 p.m. They’re demanding the facility be shut down and cleaned, and protesting the retail giant’s decision to keep it open after one staffer there tested positive for COVID-19.

Marketplace’s Andy Uhler has been following this story. The following is an edited transcript of his conversation with the Marketplace Morning Report’s David Brancaccio.

David Brancaccio: Amazon’s not the only company facing backlash from workers concerned about safe working conditions, is it?

Andy Uhler: That’s right. Amazon’s scale, and also the surge in people ordering even more stuff online in the era of social distancing means any disruption to their workflow would be a big deal. But a lot of workers are now voicing concern that companies aren’t doing enough to keep them safe from COVID-19. Workers at Instacart, the grocery shopping and delivery service, began a nationwide walkout in the United States today because they say that company isn’t doing enough to protect them or provide hazard pay. Instacart employs more than 150,000 workers across the U.S.

Brancaccio: And an Amazon subsidiary, Whole Foods, is also facing some backlash?

Uhler: Right. Whole Foods workers have a flyer circulating online indicating a plan to conduct a “sick-out” tomorrow. That would mean all employees would use a paid sick day to basically shut down stores. The workers assert that they’re putting themselves at risk by coming into work. They’re demanding three weeks’ paid time off for everyone, along with double hazard pay.

There’s even talk of a general strike in the U.S, calling on workers everywhere to walk off the job. #GeneralStrike began trending on Twitter over the weekend.