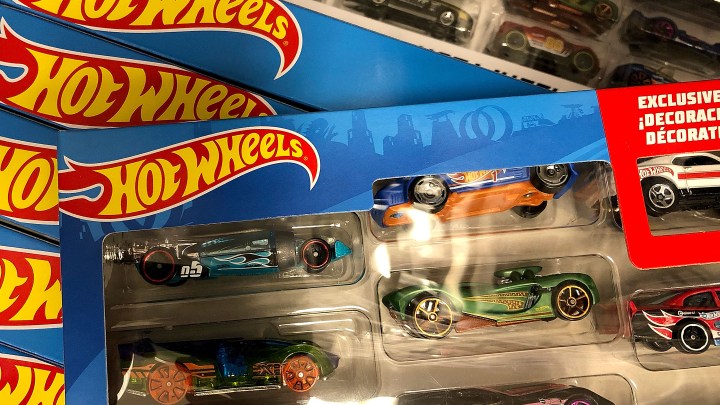 COPY
Hot Wheels cars, a Mattel product, weren't flying off the shelves during the pandemic like other games. So Mattel has pivoted. Justin Sullivan/Getty Images
COVID-19

Hot Wheels cars, a Mattel product, weren't flying off the shelves during the pandemic like other games. So Mattel has pivoted. Justin Sullivan/Getty Images
Listen Now

“Money that went into vacations or other types of entertainment for families is now really going into toys,” Byrne said.

Even people who are out of work are still shelling out cash for toys, said San Jose State University sociologist Elizabeth Sweet. “Parents were trying to buffer their children from the immediacy of the crisis,” Sweet said.

That worked out for some toy companies. People were buying puzzles and games families could play together. But toy analyst Richard Gottlieb said it didn’t work out for Mattel.

“The products they sold were not the products that were in demand,” Gottlieb said. That includes Barbie, American Girl dolls, Hot Wheels, Fisher-Price — they were not flying off the shelves in the same way

Mattel pivoted during the pandemic, said Khaled Samirah, an analyst with Euromonitor, playing to the moment at hand with marketing that uses the phrase “play is never canceled.” The company filled its blog with do-it-yourself activities built around their brands that parents can use to educate their kids while they play.

“They are becoming more important now to parents, as they are now getting into the habit of teaching their kids at home,” Samirah said.

As the lockdown drags on, parents may be looking for toys that feel familiar like Mattel’s, Sweet said.

“What I see that toy industry doing is continuing to go back to old tried-and-true things instead of exploring new avenues,” she said.

But to fully regain the ground it lost early in the pandemic, Mattel needs movie theaters to reopen and Hollywood to get going again, said Kevin Sandler, a film and media studies professor at Arizona State University.

And without splashy opening days, like the one Universal Pictures postponed for its “Minions” movie this spring, those toys don’t have the big “gimme! gimme! I want!” push behind them.