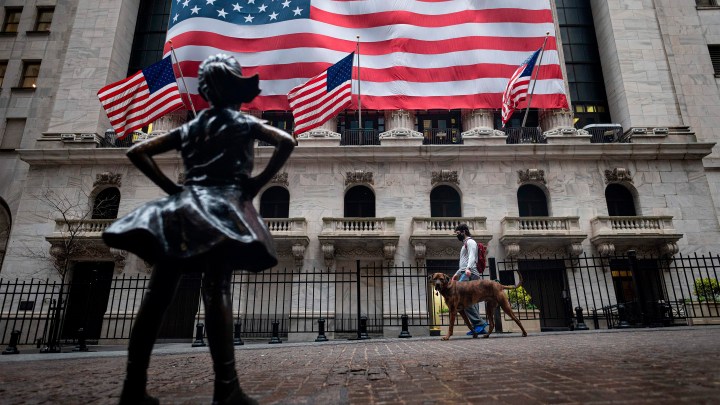 This week’s parade of bank earnings continued Wednesday. We got second-quarter earnings reports from Goldman Sachs, PNC Financial Services Group and US Bancorp. PNC and US Bancorp do more consumer business than Goldman Sachs. And they both reported setting aside more money for loan losses. So why are banks so worried about whether consumers will pay them back?

At the end of the first quarter of this year, U.S. consumers were a record $14.3 trillion in debt.

“There’s a lot of debt out there,” said Rita McGrath, a professor at Columbia Business School. She points out that $14 trillion in consumer debt was there before the pandemic hit.

“This is a kind of a time bomb that’s been coming for a long time,” she said.

Now, massive layoffs have left some consumers wondering how they’re going to pay their bills. Ian O’Neill lost his job as a technician on the New York set of the CBS series “FBI” in mid-March. They were two days away from wrapping up episode 19.

O’Neill is the breadwinner for his wife and two kids. They have a balance of about $20,000 on their Discover card. Plus a car lease payment, student loan and a mortgage. O’Neill said so far he’s been able to freeze all those payments. They’re getting by on his unemployment check. That includes an extra $600 a week, which runs out at the end of the month.

“When those programs start to run out, that’s when I get really panicked about what am I supposed to do?” O’Neill said.

His first priorities, he said, will be the mortgage, utilities and food. The credit card debt? That comes last. Banks know that. G. Scott Clemons, chief investment strategist at Brown Brothers Harriman, said three of the biggest consumer banks set aside billions in the second quarter to cover loans they might have to write off.

“But $30 billion of loan loss reserves for a single quarter tells you that they’re anticipating a lot worse to come,” Clemons said.

He added that crunch time could come as soon as this September, especially if unemployed people don’t find new jobs or get any more help from the federal government.