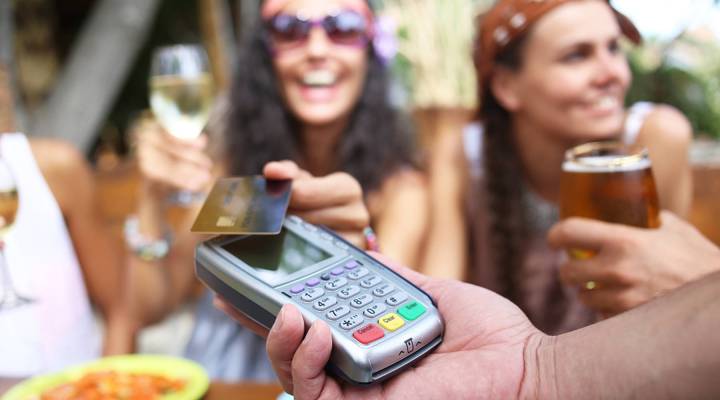 COPY
People have been spending more on their credit cards, and some are using buy-now, pay-later services, says Andrew Davidson with Comperemedia. valentinrussanov

People have been spending more on their credit cards, and some are using buy-now, pay-later services, says Andrew Davidson with Comperemedia. valentinrussanov
Listen Now

Over the last few days, we’ve been getting several earnings reports from the country’s big banks. And on the surface, things haven’t been looking so great. Monday, Goldman Sachs said profits fell almost 50% compared to last year, thanks in part to a slowdown in corporate deal-making. That helped push down profits at Bank of America too.

But when you look a little deeper into these reports, you’ll find it’s not all doom and gloom. In fact, banks have been reporting that consumer and business lending have been growing over the past year.

The big reason consumers have been borrowing more is because they’ve been spending more on their credit cards.

“I mean, it’s still full steam ahead, I think, from a credit perspective,” said Andrew Davidson with Comperemedia. People are also taking out personal loans and using buy-now, pay-later services, he said.

“You have this intensely competitive environment in which consumers have more access to credit than ever,” Davidson said.

Meanwhile, corporate borrowing has been growing at the fastest pace in nearly 15 years, said Mike Mayo, bank analyst with Wells Fargo Securities. He said that’s in part because businesses have been trying to build up their inventories.

“You’re also seeing more expansion of businesses,” Mayo said. “And that was placed on hold to some degree during the pandemic.”

Many business owners have been taking out loans because they’re worried that if they wait, those loans will get too expensive, said Karen Kerrigan, CEO of the Small Business and Entrepreneurship Council.

“I mean, the cost of capital is only going to increase as rates go higher, as the Fed, you know, makes additional moves,” she said. Kerrigan said the uptick in business borrowing could also be a sign that businesses want cash on hand to help them through a downturn.

In fact, banks themselves say they’re setting aside more money in case borrowers default on their loans.

“It is better to be the concerned banker at the beginning and save up too much versus waiting too late to recognize the losses,” said Nate Tobik, founder of Complete Bank Data.

But Mayo with Wells Fargo Securities said banks aren’t setting aside nearly as much in reserves as they did at the start of the pandemic.

“Then, you were looking at unemployment rates that might approach 15%,” Mayo said. “Now, unemployment’s under 4%, and maybe it goes up some, but it’s night and day versus the pandemic.”