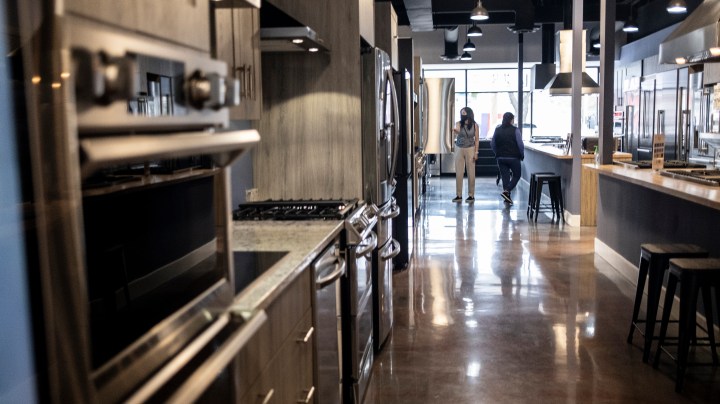 Retail sales rose 1% in June, the Commerce Department reported Friday. A lot of that increase is tied to rising prices at the gas pump and the grocery stores. But overall, Americans are still buying, even though they say they’re worried about the economy.

When it comes to consumers and the economy, experts look at a bunch of data points to try to figure out where things are moving, kind of like arrows on a roadmap. Right now, those arrows are pointing left, right, forward and backward.

“There are some sort of weird, irregular aspects to all this,” said Ted Rossman, an analyst at Bankrate.

For instance, electronics and appliances have seen the biggest drop in sales in the last year — more than 9%. That might mean people are putting off big purchases because they’re worried about their wallets. At the same time, spending at bars and restaurants is still strong.

“It’s a key discretionary sector that I think people could easily cut back on if they were especially worried about inflation,” Rossman said.

Rossman has a few guesses about what’s happening here: One is that we’ve been living in a K-shaped economy, in which inflation is hitting low-income Americans the most. Another is that among people who can afford to spend, there’s still this huge pent-up demand for experiences like travel, since they’ve already gorged on goods.

Simon Blanchard, who researches consumer psychology at Georgetown University, has another theory. People are worried about inflation, but they’re not panicking yet. And that’s showing up in how and where they’re cutting back.

“You don’t want to start sprinkling your losses everywhere you’re at,” he said.

People might be making trade-offs, maybe switching to store-brand cereal to save a buck so they can still go out for ice cream, or going out for drinks, but only having one.

Whatever the answer is, the fact that people are worried about the economy but are still spending is confusing for businesses. It makes it hard for companies to project future sales and figure out what to stock, according to Sucharita Kodali, a retail analyst at Forrester.

“Typically, when you see a recession coming, you stop ordering.”

But sales numbers tell retailers they should keep ordering — give the people what they want.

“It’s more important to look at what people are doing, not what they’re saying,” Kodali said.