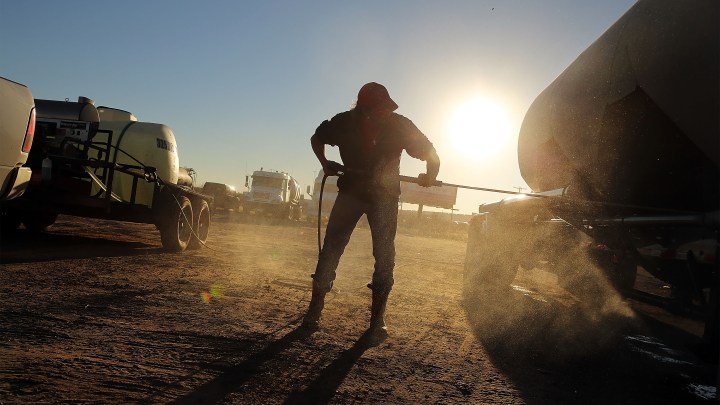 COPY
A truck used to carry sand for fracking in Odessa, Texas. The recent oil bust has been felt in the sand mining business. Spencer Platt/Getty Images

A truck used to carry sand for fracking in Odessa, Texas. The recent oil bust has been felt in the sand mining business. Spencer Platt/Getty Images
Listen Now

Sand is an important component of fracking. Producers mix it with water to blast oil and gas from shale.

The need to procure that sand kept Marcelo Maldonado busy for about four years at C&J Energy Services in Houston.

He said when oil was selling at $120 a barrel a few years ago, he was buying sand from Wisconsin and shipping it down to Texas.

“The standard was to bring it from up north to use the rail to put it closer to the wells,” Maldonado said.

They’ve been mining sand in Wisconsin for 100 years, but fracking caused a boom. Thomas Pearson at the University of Wisconsin-Stout wrote a book about it called “When the Hills are Gone: Frac Sand Mining and the Struggle for Community.”

“Many of the mining companies assured residents that this was an industry that was here to stay,” Pearson said. “And within a couple of years, those promises were shown to be false.”

And to save money, oil companies started buying sand closer to their wells.

“We saw a boom. A spike in demand. A lot of people had to get hired to operate those plants,” he said.

That lasted for a couple of years, and then COVID-19 hit and oil prices tanked.

When energy companies and sand miners propose setting up in rural towns, local leaders often jump at the prospect of adding jobs and tax revenue, but there are always consequences.

“I think that’s always the tension. How do you get the economic development without the volatility? Because volatility is really difficult for planners and for people,” said Michael Webber at the University of Texas at Austin.

The latest frac sand company to seek Chapter 11 protection is Houston-based Hi-Crush, which operates mines in small towns around the country, including in Wisconsin and Minnesota.

The company has cut 60% of its workforce since mid-March.