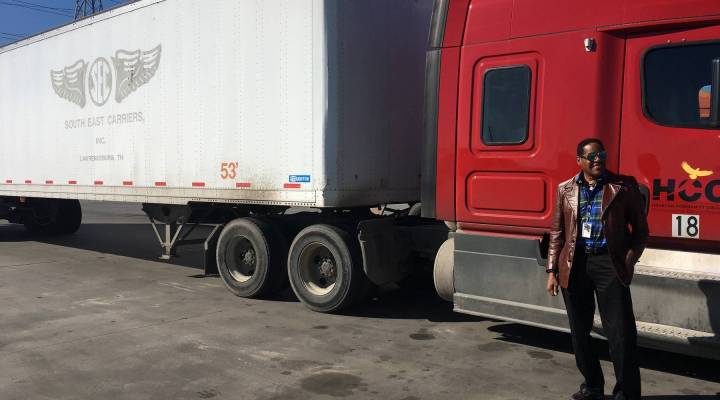 The fracking boom that’s made the U.S. the world’s top oil producer shows no signs of slowing down. But in Texas, the boom’s had what the state is calling an “unintended consequence,” as oilfield highways have become overwhelmed with heavy truck traffic, there’s been an uptick in the number of deadly crashes. Officials are exploring solutions to this ongoing problem.

The West Texas Permian Basin is hours away from the state’s major cities, but it’s still normal to find yourself stuck in bumper-to-bumper traffic there. That’s because it takes a lot of trucks to get fossil fuels out of the ground. A study by Texas A&M University in 2016 estimated that drilling and fracking a single oil or gas well in the Permian can involve almost 1,000 trucks, hauling things like drilling equipment and sand. As a result, driving oilfield roads can be treacherous. “It gets very scary and very stressful,” said Jose Narbaiz, a trucker who hauls sand for a living in West Texas.

Narbaiz has a YouTube channel where, from the cab of his truck, he documents life on the road. Truckers have limits on how many hours they can drive over a certain period of time, and with drivers trying to pack in as much work as they can, Narbaiz says the highways get hectic. “People are trying to go around you, while traffic’s coming in from the opposite direction,” he said. “They will take that risk to go around you just to pass you.”

According to a local non-profit, the Midland-Odessa Transportation Alliance, this part of Texas led the state in deadly crashes involving commercial vehicles in 2018. The group says deaths from those wrecks more than doubled in two years, to about 100 in 2018. “We’re seeing a level of activity out here that is absolutely hellacious, and the infrastructure hasn’t kept up with that,” said James Beauchamp, the president of the alliance.

Oil and gas companies pay the state billions in taxes every year, and Beauchamp argues more of that money should go to fixing roads to make them safer. But he also says the industry needs an improved culture of safety. “There’s such a rush to fill trucking positions that we’re not focusing on safety or training the way we used to,” he said.

Across the state in Houston, Don Jefferies fires up a rig simulator used in a training class he teaches. According to Jefferies, routine training is essential. Companies can mandate it, but Jefferies says it’s hard when dealing with independent drivers. “If I own my truck, I feel like I’m the boss,” he explained. “So it’s kinda hard for you to tell me what to do with my truck, because I think I know everything about that truck, and I don’t think you know too much of anything.”

As oil production grows, the highways are likely to get even busier. Multiple oil companies have banded together to address that growth, and the industry’s impact on issues like affordable housing and road safety. The companies have pledged $100 million for a wide-ranging effort, but there’s no clear plan yet for how the money might be spent.

Todd Staples of the Texas Oil and Gas Association says the industry also wants additional police on the highways. “We’re asking the legislature to support the [Texas] Department of Public Safety’s funding request for additional personnel, for long-term enforcement,” he said.

According to Staples, the industry also supports tapping into the state’s more than $12 billion savings account, for road money. Most of the Texas state savings come from oil and gas taxes. Meanwhile, the state transportation department is investing millions of dollars into highway improvements in the regions, and has installed roadside billboards that warn drivers to be careful in the vicinity of trucks.

Texas A&M researcher Cesar Quiroga says companies should think of more “creative” ways to get trucks off the road, such as changing how the water used for fracking is moved around. “Can we, for instance, enhance or increase the use of temporary pipelines?” he said.

A&M researchers are currently working with the state to explore solutions. They plan to share their findings later this year.