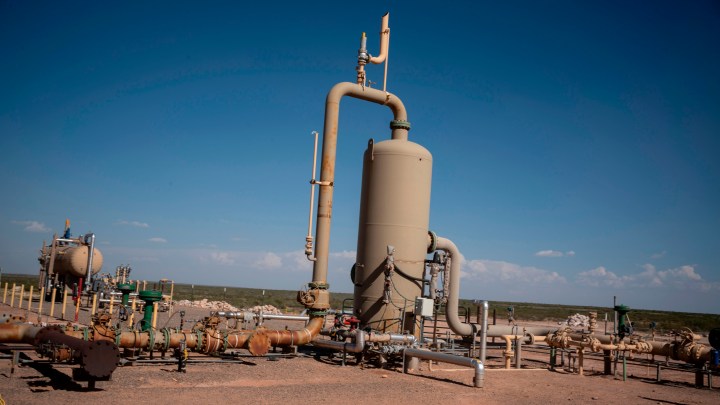 COPY
Fracking for oil is a two-stage process. First, you drill the well. Then you complete it by injecting sand and water to force the oil out. Above, fracking equipment at a well in Culberson County, Texas. Paul Ratje/AFP via Getty Images

Fracking for oil is a two-stage process. First, you drill the well. Then you complete it by injecting sand and water to force the oil out. Above, fracking equipment at a well in Culberson County, Texas. Paul Ratje/AFP via Getty Images
Listen Now

There’s a lot of oil under North America. Getting it out in order to increase supply and reduce prices at the pump is, more often than not, a matter of horizontal drilling, otherwise known as fracking. The technique faces opposition on environmental grounds and now is also up against shortages of materials and labor.

Fracking for oil is a two-stage process. First, you drill the well. Then you complete it by, among other things, injecting a slurry of sand and water at high pressure to force the oil out of the ground.

For a while now, oil companies have had a surplus of wells that they had drilled but not yet completed.

“And in the last year and a half, the industry has been able to increase the number of producing wells without really dramatically increasing drilling, because they’ve been eating down that inventory of drilled but uncompleted wells,” said Mark Finley, a fellow in energy and global oil at Rice University’s Baker Institute for Public Policy.

“The industry has been kind of eating its seed corn, as we used to say back on the farm,” he said, adding that companies in the U.S. could soon run out of that surplus.

But even for producers that still have wells they need to complete, it’s an uphill battle right now, said Paul Bommer at the University of Texas at Austin.

That will allow those oil service providers to raise their prices for doing that work. And if the price of oil stays over $100 a barrel for long, even more companies are going to want to start fracking again.

But there’s a limit to how much of that can happen all at once; it’s not only crews that you need to frack a well, said Michael Lynch, a fellow at the Energy Policy Research Foundation in Washington, D.C.

“People have also talked about shortages of fracking sand, which is actually a specialized kind of sand,” he said. “And if you accelerate that, you’ll get a lot more cost inflation and most of the industry would like to avoid that.”

Even if you’re getting a $120 for a barrel of oil, Lynch said those marginal gains are going to dry up pretty quickly if you’re paying three or four times what you normally would for sand and water.