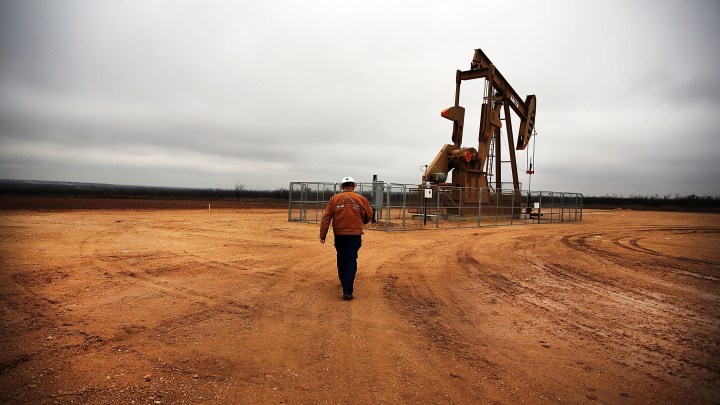 COPY
It might take six to nine months for domestic oil producers to substantially ramp up production. Spencer Platt/Getty Images

There’s really no mystery about why oil prices are so high right now; it comes down to supply and demand. Pulling Russian oil off the market decreased the global supply. Demand remains more or less constant. Prices go up.

One sure way of bringing prices back down is to increase the supply. There’s no doubt that the U.S. could do that — there’s still an awful lot of oil underneath North America and off the coast.

Thing is, even if we decided today that we were going to start drilling, it would be a while before any additional oil made its way out of the ground and into a refinery.

It’s natural to look at a gas pump that reads $4 a gallon or more and wonder why oil companies based in the U.S. aren’t putting more oil onto the market. For one, they could take advantage of these high prices and two, they could help out American consumers.

“The problem is, and the harsh reality for U.S. oil markets is that there is no switch that anyone can flip to suddenly turn on oil production overnight. There just isn’t,” said Clark Williams-Derry, an analyst at the Institute for Energy Economics and Financial Analysis. “There is probably going to be six-to-nine months’ lag between today’s high prices and the time when the oil industry can bring significant amounts of new production online.”

Some drillers are already ramping up in the Permian Basin of West Texas and the Bakken oilfield of North Dakota, mostly privately owned companies chasing profits. Public companies and their investors, burned in the past by what people in the industry call “irrational exuberance,” are moving a lot more slowly.

“A few have started to talk about spending more, like 20%. But they’re still feeling pressure from the capital markets and so forth to not go hog wild, as they have a tendency to do historically,” said Michael Lynch, a fellow at the Energy Policy Research Foundation.

Major oil multinationals aren’t limited to increasing production in West Texas or the Dakotas. They have lots of other, cheaper, options.

Fracking shale wells is more expensive than getting oil out of conventional ones. They also have higher input costs and require more work and equipment to get the oil moving, according to Francis O’Sullivan, senior lecturer at the MIT Sloan School of Management.

“So even though it has the capacity to ramp up production quickly, it’s important to recognize that it’s certainly not a low-cost source of new production,” he said.

High oil prices are both a blessing and a curse for companies trying to get crude out of the ground. Sure, they’re able to charge more for a produced barrel, but their service providers can also charge more for their labor. That is, if there’s any available.

“You might have 100 wells you’d like to complete, but you can’t get the equipment and the people to complete them,” he said.

That’s only going to increase the amount of time, Bommer added, between the drill bit hitting the dirt and the first gallon flowing into your tank.