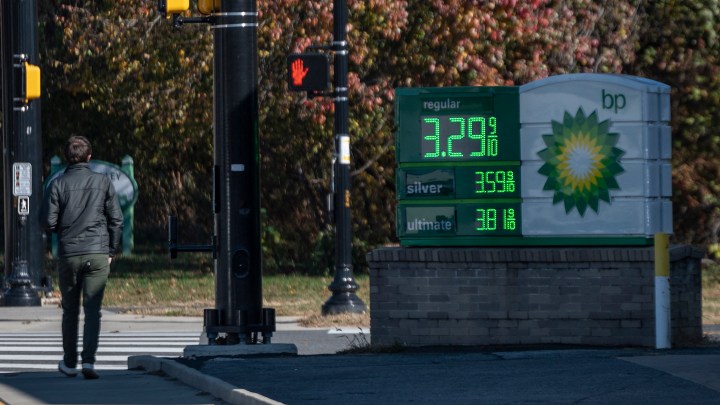 COPY
Gas prices are nearly 60% higher than this time last year, according to AAA. Andrew Caballero-Reynolds via Getty Images

Gas prices are nearly 60% higher than this time last year, according to AAA. Andrew Caballero-Reynolds via Getty Images
Listen Now

If you’re hitting the road this weekend, you’ve probably noticed that it’s getting more expensive to fill up your tank.

Gas prices this Thanksgiving are more than 60% higher than they were last year, according to AAA. That’s a big reason why President Joe Biden announced this week that the United States will release 50 million barrels of oil from its strategic reserve.

Even though demand for oil is rising, oil production hasn’t caught up to pre-pandemic levels, said Andrew Gross with AAA.

“So, until oil production increases, there’s going to be that upward pricing pressure on what folks are paying at the pump,” Gross said.

Releasing oil from the strategic reserve isn’t going to bring prices down this weekend. But the extra oil could help alleviate some of that pricing pressure, according to Tom Seng, director of the School of Energy Economics at the University of Tulsa.

“Any time you increase supply, regardless of how that happens, you’re going to see an impact,” he said.

“Let’s just say they released it tomorrow. So we could run our refineries for just a little more than three days,” Seng said.

And the holidays are just starting. Demand for oil is likely to go up over the next five to six weeks.