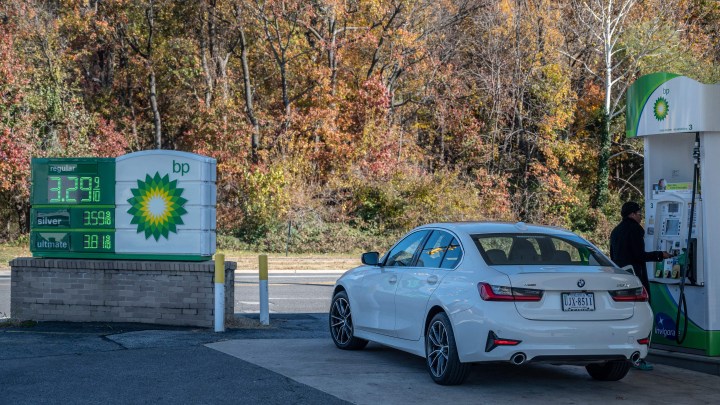 COPY
Oil producers' “incentives are all aligned to keep prices high," an expert says. "And that is going to create some real pain for consumers.” Andrew Caballero-Reynolds/AFP via Getty Images

Oil producers' “incentives are all aligned to keep prices high," an expert says. "And that is going to create some real pain for consumers.” Andrew Caballero-Reynolds/AFP via Getty Images
Listen Now

On Tuesday, the national average price of a gallon of gasoline sat at around $3.40, according to AAA.

Also Tuesday, after murmuring about it for a week or so, the Joe Biden administration announced that it’s going to release 50 million barrels of oil from the Strategic Petroleum Reserve in the hope that some of it will be refined into gasoline and help ease prices at the pump.

So what will the release of a little under three days’ worth of oil into the market mean for consumers?

When we hear about inflation, one of the first things that come up is how much more it costs to fill up your car lately. And that’s put Biden in the hot seat.

“Gasoline prices happen to have this unique political connotation. And it also happens to be something that sometimes you can actually do something about,” said Ellen R. Wald, president of Transversal Consulting.

Unfortunately for consumers, though, the release of oil from the SPR “will probably have more of a political impact than it will a market impact,” she said.

That’s because in the U.S., oil production and refining it into gasoline is up to private companies.

“Oil prices are now in the hands of producers,” said Clark Williams-Derry at the Institute for Energy Economics and Financial Analysis.

Before the shale boom, Williams-Derry said, the government could blame OPEC and Russia for high oil prices. Now that the U.S. is a top producer, investors want returns from oil companies.

“Their incentives are all aligned to keep prices high. And that is going to create some real pain for consumers,” he said.

The U.S. isn’t alone here; five other countries are releasing some oil, too. Historically, this has happened because of a natural disaster — say, a hurricane — or political upheaval in an oil-producing country.

In other words, members of OPEC and the big oil companies in the U.S. aren’t ramping up supply quickly enough to meet demand.