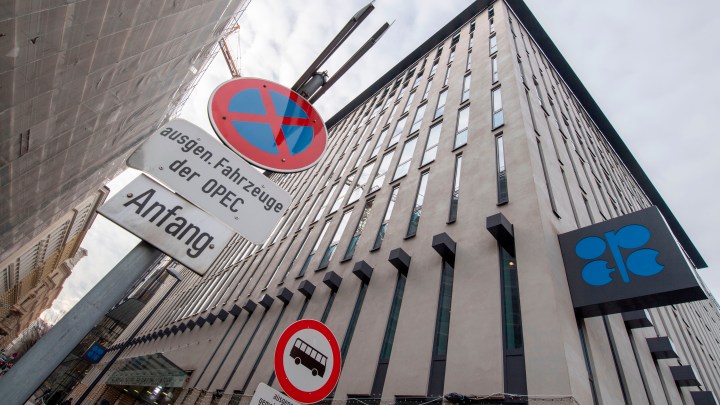 COPY
By pledging to increase output by just 100,000 barrels a day, OPEC could be implying that it expects demand for oil to fall. Above, OPEC's headquarters in Vienna. Joe Klamar/AFP via Getty Images

By pledging to increase output by just 100,000 barrels a day, OPEC could be implying that it expects demand for oil to fall. Above, OPEC's headquarters in Vienna. Joe Klamar/AFP via Getty Images
Listen Now

There are only two ways to bring oil prices down from the $100 a barrel or so where they’ve been hovering since the beginning of March: reduce demand or increase supply.

The Biden administration has been leaning into the latter — encouraging energy companies in the U.S. to start drilling thousands of wells they have permission to drill but haven’t, and encouraging oil-exporting countries in the OPEC+ cartel to increase their output.

Well, on Wednesday, OPEC+ agreed to produce another 100,000 barrels a day come September. That might sound like a big number, but in the context of oil, it’s minuscule. In July and August, for instance, the cartel boosted production by 600,000 barrels a day.

OPEC uses announcements like these to send a signal to oil markets.

“Because OPEC controls so much of the global market, they have the ability to move prices just on what they say,” said Matt Smith, a lead oil analyst with the data and analytics firm Kpler.

By pledging to boost output by only 100,000 barrels a day, OPEC could be signaling it thinks that a recession is likely and demand for oil will fall.

“As we’ve seen previously with recessions, you know, people lose their jobs, they have less money to spend, and people cut back,” Smith said. “And you see that reflected in energy demand.”

There are signs that demand for oil is already weakening. Prices have fallen over the past month and gasoline demand this summer has been pretty muted, observed Amy Myers Jaffe, a professor at Tufts University.

“Summer gasoline demand in the United States is not as healthy as it was expected to be. And we are seeing the price impact,” she said.

President Joe Biden has been trying to persuade Saudi Arabia, the de facto leader of OPEC, to produce more oil so gas prices keep going down.

That puts OPEC in a tricky spot, said Bob McNally, president of Rapidan Energy Group. By announcing such a small increase for September, “they’ve delivered on a step that the White House asked for and expected, but yet they really haven’t changed much.”

Meanwhile, other OPEC members, including Libya, Qatar and Nigeria, have been struggling to meet their existing monthly production targets, said Tom Seng, director of the school of energy at the University of Tulsa.

“It’s hard to say that these different oil-exporting countries can all keep their production flowing, can all systematically increase every first of the month,” he said.

In other words, 100,000 extra barrels a day might be all that OPEC can produce.