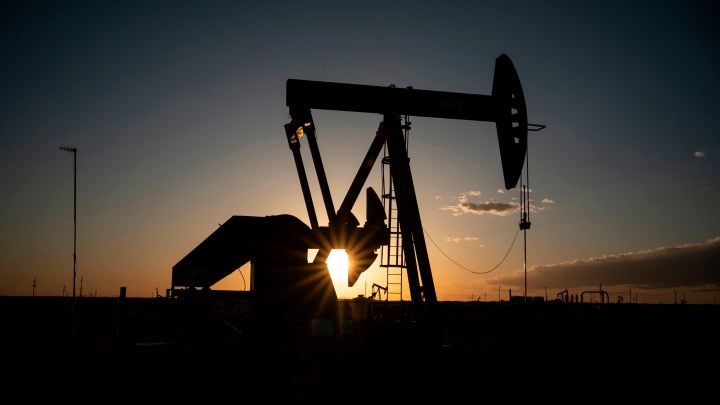 COPY
A pump jack operates in New Mexico. Though the U.S. has oil-producing regions, it would take a hefty investment to retrofit refineries to process light sweet crude. Paul Ratje/AFP via Getty Images

A pump jack operates in New Mexico. Though the U.S. has oil-producing regions, it would take a hefty investment to retrofit refineries to process light sweet crude. Paul Ratje/AFP via Getty Images
Listen Now

There’s been a lot of discussion about the fact that the United States imports Russian oil — and a pretty good amount of it.

Now, you could be excused for asking yourself: “Wait a second, I thought the U.S. had a bunch of oil in the Permian Basin in Texas and the Bakken Shale in North Dakota. Why the heck are we importing oil?” Turns out the answer is part chemistry and part economics.

When oil refiners talk about crude, they generally ask two questions. First: How easy is it to break up the hydrocarbons to produce, say, gasoline or jet fuel? (In oil speak: How light is it?) Second: How much sulfur is in the oil? If there isn’t much, it’s called sweet crude.

That’s because they take longer to process and need specialized refining equipment. This cheap, lower-quality crude comes from Canada, Venezuela and Russia, among other spots. Back in the late 1990s and early 2000s, it was the product U.S. refiners were buying.

“A lot of refineries, especially in the Gulf Coast, made a very expensive bet to invest in this equipment that would allow them to save money on input costs by processing, you know, lower-quality crude,” said Richard Sweeney, an assistant professor of economics at Boston College.

Then came the fracking boom. Fracking produces light, sweet crude that can’t be refined with that equipment.

“And it’s just like the economics of that bet turned out, ex-post, to be really bad,” Sweeney said.

Even though a lot of that light sweet crude is coming from Texas, where the refineries are, the U.S. imports foreign oil in order to make use of the existing infrastructure.

“They spent billions of dollars on this refining capacity in the ’90s and early 2000s,” said Ryan Kellogg, professor of public policy and deputy dean for academic programs at the University of Chicago. “They’re not going to want to let that sit idle. It’s there, and it makes sense to use it.”

But there’s got to be a way for refineries to retrofit their operations to make use of more domestically produced oil, right?

“That is, you know, something we could do. It would require some reconfiguring of the refineries,” said Daigle. “But does it make economic sense for the refining companies to do that?”

Reconfiguring refineries costs a lot of money, so why do it if companies can still turn a profit using their existing platforms?

To be fair, the U.S. refining system is processing more light sweet domestic crude than it used to, but nowhere near the point where the country can stop importing heavier, sour oil from abroad.

The upshot: Since 2020, the U.S. has been a net exporter of oil, sending a lot of its light sweet crude to Europe and Asia where refineries are equipped to deal with the kind of oil coming out of West Texas and North Dakota.