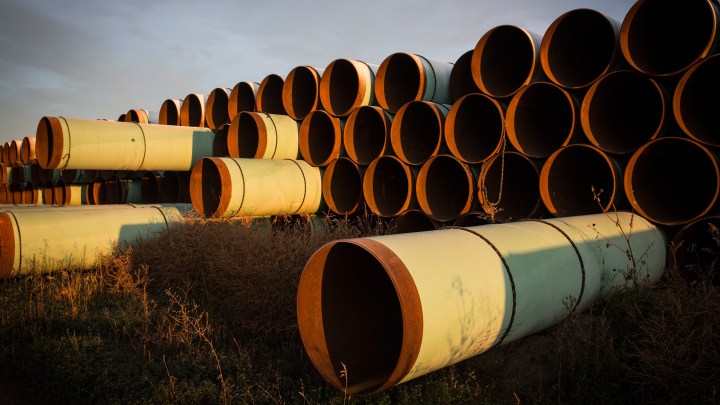 For the past decade or more, you’ve probably been hearing about the controversial Keystone XL pipeline.

It was conceived to carry Canadian crude oil to the U.S., from the province of Alberta down through Montana, South Dakota and Nebraska, where it would join the existing Keystone pipeline.

Well, a major chapter has ended. Wednesday night, the XL pipeline project was officially canceled by its developer, TC Energy.

Fossil fuel opponents are partying, assuming the oil is now stuck in the ground and can’t get to market.

But it turns out that, as challenging as the oil business is these days, Canadian crude may be finding workarounds.

The crude oil deposits in western Canada are known as “oil sands.” The substance is thick like peanut butter, and it takes a lot of work to extract.

But for oil companies, that’s the easy part.

The headaches they encounter — the “above-ground risks,” as the companies refer to them — are created by politicians, investors, markets. And they’re growing.

Back in 2008, when the Keystone XL pipeline was drawn up, oil companies were flocking to Alberta, where it was supposed to start, said analyst Thomas Liles at Rystad Energy.

“You know we were obviously in a higher oil price environment,” Liles said. “And oil sands economics were pretty lofty at those times.”

But crude prices have cratered twice since then. And pipelines to take oil sands to refineries have met increasing opposition. Not just Keystone XL to the south. There’s another fight over a proposed pipeline from Alberta to Canada’s west coast.

“It’s still got a lot of opposition, particularly in the Vancouver, British Columbia, area, where it terminates. And there’s a lot of [indigenous people’s] groups that have opposed it,” said Robert Auers, a consultant at Turner, Mason.

Still, he thinks this pipeline, and a second one, will get approved in the next three years.

But there’s another risk: Wall Street. Institutional investors worry that with climate rules and electric cars coming, will there be much demand for oil?

He thinks that for all the challenges, oil sands production will still grow.

In Nebraska, resistance and negotiation along Keystone XL pipeline