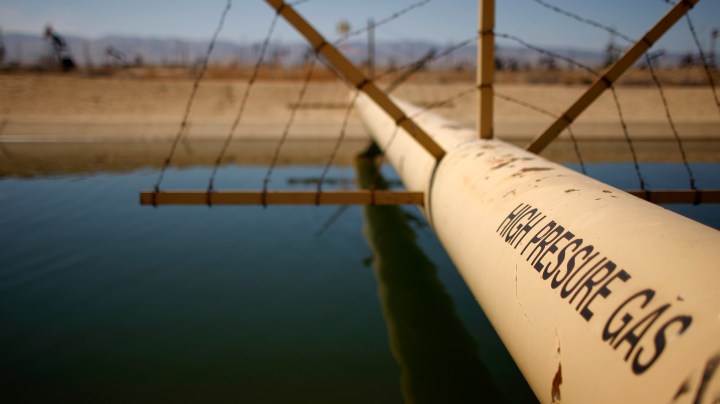 COPY
A high-pressure gas line crosses over a canal in an oil field over the Monterey Shale formation where fracking is used to extract oil and gas in Lost Hills, California, in 2014. David McNew/Getty Images

A high-pressure gas line crosses over a canal in an oil field over the Monterey Shale formation where fracking is used to extract oil and gas in Lost Hills, California, in 2014. David McNew/Getty Images
Listen Now

U.S. monthly crude oil production fell in July by 2.3% compared to June, according to new numbers from the Department of Energy. It comes as analysts and investors are debating whether the American shale oil boom — production based on “fracking” technology — could be losing momentum.

For a decade, fracking technology — shooting pressurized water, sand and chemicals down a wall to break up or fracture shale rock to release the energy inside — has helped boost U.S oil production. In 2018 the United States became the world’s largest producer.

Now there are concerns that shale drilling and fracking could be hitting some limits. One issue is that wells may be spaced too closely together. Tightly spaced wells maximize resources, including labor, water and trucks. But there are concerns they could compete for the same oil underground; one investment bank estimates this “well interference” could limit oil production by 15% to 20%.

And then there are concerns over drilling investment. The energy sector is the poorest performing part of the S&P 500 index, and investors are demanding that money be returned to investors rather than plowed into oil production.