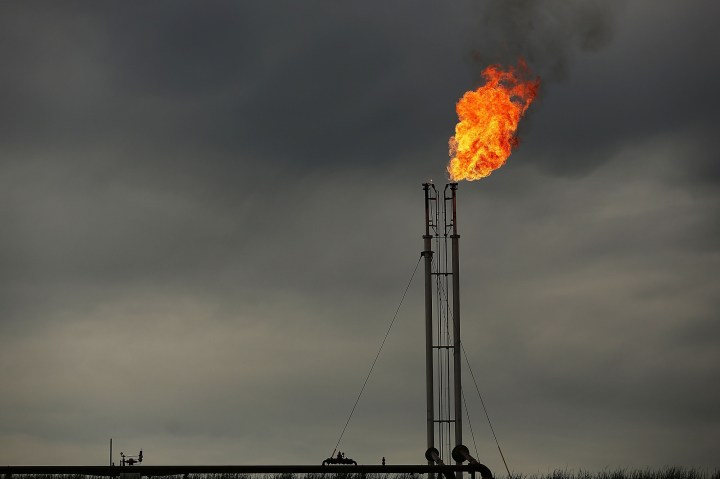 COPY
Natural gas is flared off at a plant outside of Cuero, Texas. Spencer Platt/Getty Images
Shelf Life

Natural gas is flared off at a plant outside of Cuero, Texas. Spencer Platt/Getty Images
Listen Now

When the coronavirus pandemic shocked global energy markets this spring, the United States, Saudi Arabia and Russia led a multinational deal in production cuts to stabilize prices. But the reason that the United States was instrumental in this deal can be traced back to a natural gas well in Texas where an energy revolution began.

“Marketplace” host Kai Ryssdal spoke with Daniel Yergin, vice chairman of IHS Markit and Pulitzer Prize-winning author, about his latest book, “The New Map: Energy, Climate, and the Clash of Nations,” and how the rise of fracking technology changed America’s position in the world. Click the audio player above to hear their conversation. The following is an excerpt from the book.

If you want to get to the beginning of the shale revolution, pick up Interstate 35E out of Dallas and head north forty miles and then take the turnoff for the tiny town of Ponder. Pass the feed store, the white water tower, the sign for the Cowboy Church, and the donut store that’s closed down. Another four miles and you’re in Dish, Texas, population about 400. You end up at a wire mesh fence around a small tangle of pipes with a built-in stepladder. You’re there—the SH Griffin #4 natural gas well. The sign on the fence tells the date—DRILLED IN 1998.

That was not exactly a great time to be drilling a well. Oil and gas prices had cratered with the Asian financial crisis and the ensuing global economic panic. But SH Griffin #4 would change things more than anyone could have imagined at the time.

The well was drilled mainly with standard technology, but also with experimentation and ingenuity, despite considerable skepticism. The small band of believers working on the well were convinced that somehow you could extract natural gas from dense shale rock in a way that was commercially viable—something that the petroleum engineering textbooks said was impossible. More than anyone else, the unshakable conviction belonged to one man, their boss—George P. Mitchell.

By the 1970s, he had built a sizable oil and gas company, though with ups and downs along the way. But he had an unusual proclivity. He favored natural gas over oil.

Around 1972, he came across The Limits to Growth, a book by an environmental group, the Club of Rome. It predicted that a soon-to-be overpopulated world would run out of natural resources. Intrigued, he became increasingly interested in environmental issues. Natural gas became for him not only a business but also a cause, for it was cleaner than burning coal. Sometimes he would call up people and berate them if he thought that they had said something nice about coal.

Fueled by his new environmental ethos, he launched a totally different business—creating a wooded, landscaped, forty-four-square-mile master-planned community north of Houston called The Woodlands. Its slogan was “the livable forest.” (Today it has a population over one hundred thousand.) Mitchell involved himself in the decision making down to the details of the flower beds and trees and populating it with wild turkeys (until one got shot).

Yet he could hardly ignore his energy business. He had a big problem. Mitchell Energy was contracted to provide 10 percent of Chicago’s natural gas. But the reserves of gas in the ground to support that contract were running down. Mitchell Energy needed to do something. That is when Mitchell stumbled across a possible solution.

In 1981, he read the draft of a journal article by one of his geologists. The article offered a hypothesis that ran counter to what was taught in geology and petroleum engineering classes. It suggested that commercial gas could be extracted deep underground from very dense rock—denser than concrete. This was the source rock, the “kitchen” in which organic material was “cooked” for several million years and transformed into oil or gas. According to the textbooks, the oil and gas then migrated into reservoirs, from which it could be extracted.

It was thought at the time that oil and gas might still remain in the shale but could not be produced on a commercial basis because they could not flow through the dense rock. The draft article disagreed. Mitchell, beset by worries about the contract for Chicago, became convinced that here might be the road to his company’s salvation. There had to be a way to prove the received wisdom wrong.

The test area would be the Barnett Shale, named for a farmer who had come out to the area by wagon train in the mid-nineteenth century—five thousand square miles in extent, a mile or more underground, sprawling out beneath the Dallas/Fort Worth Airport and under the ranches and small towns of North Texas. Year after year, the Mitchell team toiled away to break the shale code. Their goal was to open up tiny pathways in the dense shale so gas could flow through the rock and into the well. To do that, they applied hydraulic fracturing, later much better known as “fracking,” which uses cocktails of water, sand, gel, and some chemicals injected under high pressure into rocks that would break open tiny pores and liberate the gas. Hydraulic fracturing is a technology that had been developed in the late 1940s and has been commonly used in conventional oil and gas drilling ever since. But here the fracking was being applied not to a conventional reservoir but to the shale itself. Yet time was passing, and much money was being spent, with no commercial results. Criticism mounted inside the company. But when people dared to suggest to Mitchell that his idea would not work, that it was only a “science experiment,” he would say, “This is what we’re going to do.” And since he controlled the company, Mitchell Energy went on fracking in the Barnett, but still with no good result.

By the mid-1990s, the company’s financial position was precarious. Natural gas prices were low. Mitchell Energy cut its spending and slashed its workforce. The company sold The Woodlands for $543 million. When the announcement was passed to him for review, Mitchell jotted, “OK but sad.” He later said, “I hated to sell it.” But he had no choice. The company needed the money. But Mitchell would not bend on shale. One thing that characterized him, as his granddaughter once said, was “stubbornness.” If he had doubts, he kept them to himself.

By 1998, the company had spent a lot of money on the Barnett—as much as a quarter billion dollars. When analysts did forecasts of America’s future natural gas supplies, the Barnett did not even make the list. “All sorts of experienced, educated folks wanted to bail out of the Barnett,” said Dan Steward, one of the believers at Mitchell. “They said we were throwing money away.”

Nick Steinsberger, a thirty-four-year-old Mitchell manager in the Barnett, was not among the skeptics. He was convinced that there had to be a technical solution to commercially produce from shale. Moreover, natural gas prices were low, and he was also trying to bring down the costs of drilling a well. To do that, he had to attack one of the biggest costs—that of guar.

Guar, mostly imported from India, is derived from the guar bean. It is used extensively in the food industry to assure consistency in cakes, pies, ice cream, breakfast cereals, and yogurt. But it has another major use—in fracking, in a Jell-O-like slosh that carries sand into the fractures to expand them. But guar and the related additives were expensive. At a baseball game in Dallas, Steinsberger ran into some other geologists who had successfully replaced much of the guar with water, but in another part of Texas and not in shale. In 1997, he experimented with their water recipe on a couple of shale wells, without success.

Steinsberger got approval for one final try. This was the SH Griffin #4 in Dish. The team was still using water to replace most of the guar, but this time they fed in the sand more slowly. By the spring of 1998, they had the answer. “The well,” said Steinsberger, “was vastly superior to any other well that Mitchell had ever drilled.” The code for shale had been broken.
The new technique needed a name. They didn’t want to just call it “water fracking.” That would have been too prosaic, even boring. So they called it “slick water fracturing.”

The company quickly adapted the technique to its new wells in the Barnett. Production surged. Yet if it was going to develop shale on a large scale, Mitchell Energy needed a lot more capital, which it simply did not have. Reluctantly, George Mitchell started a process to sell the company. Personally, it was a difficult time for him. Although he could take great satisfaction that his intuition—and conviction—had been proved right after seventeen years, he was being treated for prostate cancer and his wife was slipping into Alzheimer’s. There were no buyers. The sales process was called off, and the company went back to work.

Over the next two years, Mitchell Energy’s gas output more than doubled. This caught the attention of Larry Nichols, CEO of Devon Energy, one of the companies that had passed on Mitchell Energy during the earlier sales process. Nichols challenged his own engineers: “Why was this happening? If fracking was not working, why was Mitchell’s output up?” Devon’s engineers realized that Mitchell Energy had indeed cracked the code. Nichols was not going to let the company get away a second time. In 2002, Devon bought Mitchell for $3.5 billion. “At that time,” said Nichols, “absolutely no one believed that shale drilling worked—other than Mitchell and us.”

But shale drilling needed another technology to be economic. This was horizontal drilling. It allowed operators to drill down vertically (today, as much as two miles) to what is called the “kick-off point,” where the drill bit turns and moves horizontally through the shale. This exposes far more of the rock to the drill bit, thus leading to much greater recovery of gas (or oil). While there was experience with horizontal drilling, the technology did not become more prevalent until the late 1980s and early 1990s. This was the result of advances in measurement and sensing, directional drilling, seismic analysis, and in special motors that would do a remarkable thing—a mile or two underground, they would propel the drill bit forward once it had made its ninety-degree turn and started moving horizontally. And it required one other thing—extensive “trial and error.” Devon was now positioned to try to meld horizontal drilling with fracking.

“As we drilled each well and as we saw the continuing production of the wells, we realized a little more each day that this was indeed a game changer,” Nichols recalled. “There never was a single Eureka moment. There were lots of small Eureka moments as we gradually improved our technology.”

By the end of that drilling program, they had the proof. Devon’s engineers had successfully yoked together the two technologies—slick water fracturing with horizontal drilling—to liberate natural gas imprisoned in the shale. “The rest was history,” Nichols would later say.