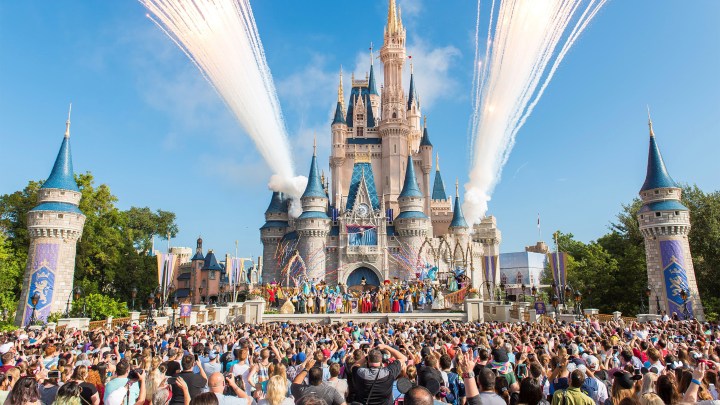 COPY
You won't see crowds like this at the reopened Walt Disney World Resort in Florida. Jacqueline Nell/Disneyland Resort via Getty Images
COVID-19

You won't see crowds like this at the reopened Walt Disney World Resort in Florida. Jacqueline Nell/Disneyland Resort via Getty Images
Listen Now

Cases of COVID-19 are surging in Florida, but that isn’t stopping Walt Disney World Resort in Orlando from reopening this weekend. Though the experience won’t quite be the same: no parades, no indoor shows and no hugging Mickey and Minnie.

So why reopen in the middle of a pandemic?

Disney may not be making enough revenue in other areas, even with the success of “Hamilton.” The company moved up the release date on its streaming platform Disney+. That’s because the platform is still pretty new and cheap — a subscription is $6.99 a month. And the company doesn’t expect Disney+ to become profitable for a few years.

That means it has to look elsewhere, but elsewhere isn’t looking so good. “Disney has multiple businesses and most of them are hurting right now,” said Stephanie Liu, an analyst at Forrester.

Disney’s brightest spot this year was supposed to be its live-action remake of “Mulan.” But with many movie theaters closed, the company has suspended its release. Meanwhile, there aren’t many live sports playing on ESPN, and Disney cruises are suspended. But parks? “They have some more control over the experience and what reopening means,” Liu said.

The company also has experience managing a reopening during COVID-19. Its resort in Shanghai started welcoming visitors again in early May.

And for Disney, the parks are about much more than making money on standard admission, which costs $109 a day. The parks are Disney’s interactive PR tool, key to sustaining the brand. Once people visit the Magic Kingdom, they may be more likely to subscribe to Disney+, buy a stuffed toy at the Disney Store or, someday, see “The Lion King” on Broadway.

“Parks is a big piece in the puzzle,” said Michael Smith, a professor of information technology at Carnegie Mellon University. “But I think it’s also a key part in the overall Disney experience.”