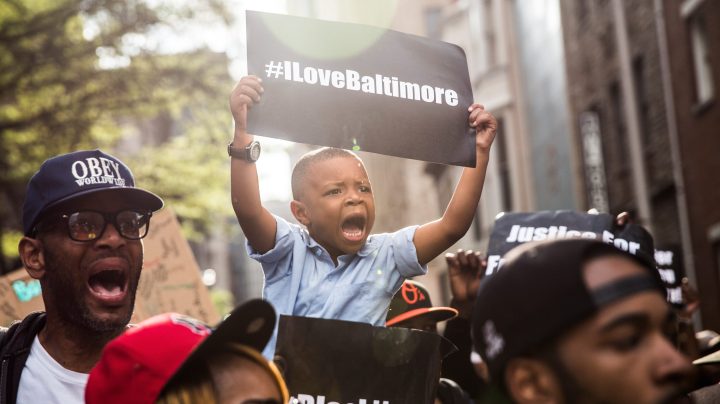 As protests against racism and police brutality continue in many cities and towns, so does the national conversation about the role of the police. The city of Baltimore has been marred by police corruption and brutality, and has faced calls for reform in the past. In 2015, the city erupted in protests after Freddie Gray died in police custody, and a subsequent Justice Department report found that Baltimore police routinely violated people’s constitutional rights.

“Marketplace” host Kai Ryssdal spoke with Detective Edward Gillespie about how he approaches his job at the Baltimore Police Academy, where he teaches officers and recruits topics like fair policing and procedural justice. A student of history and a published poet, Gillespie often uses the humanities in his courses. The following is an edited transcript of his conversation with Ryssdal.

Kai Ryssdal: Do me a favor, would you, and tell me why you decided to become a police officer.

Edward Gillespie: I had a history with public service, of trying to get into public service. I was a Naval ROTC. I tried to become a marine. I got injured. I became a public servant in the form of education. But it was when — and I always think of this moment — when I saw the second plane crash into the second tower. And I said, I have to try one more time to go this this route of stewardship. And so it was on 9/11 I decided to go this route.

Ryssdal: And now you find yourself almost 20 years later, which is kind of amazing, teaching police officers in a city, which we have to say up front, has had some issues with its police force. What is your approach to your job in these difficult times?

Gillespie: You know, as I look at a lot of what I do, a big part of it is kind of a back-to-basics, kind of an organic look at how do we get where we are, why are we in this space? And what is it about us that will make us uniquely equipped to get out of it and do things the way they’re supposed to be done? So I like to take them through the ethics that guide what we do, the history that guides it, and say, you know, what does this tell you about who we are and how we should be doing our jobs?

Ryssdal: One of the subject areas, I guess, that you teach is implicit bias and how we think about things as we’re out there and as your officers are out there. I want you to tell me about that slide that you put in there in that training syllabus about yourself.

Gillespie: If you are going to look at your bias, you have to be introspective, you have to say, what is kind of the soil that gave birth to my worldview, gave birth to my bias? And why do I look at things the way I do? I use myself as an example because I think to put yourself out there and say, look, you know, this is something that we all have to do. We all have to discuss this — police, civilians, supervisors, instructors, whatever — we all have to look at, why do I do what I do? And how might my bias affect who I am and how I do my job? And so I put together a slide in which I’ve got a picture of a cruise ship. I have a picture of the school that I attended, which is a private boys school and looks it, you know, and a lot of books, and I said, you know, this was my my upper-middle-class upbringing, and I had had very little contact with lower-income people. I had very little contact with lower-income minority people. I had very little contact with street crime, you know, growing up and that … both my parents were educators. And so I even found a little cartoon, I found a little cartoon of a stereotypic snob in a tweed jacket, and I put it on there. And I said, OK, tell me with this type of background, what type of bias do you think I may have brought into the street with me when I ended up policing in Baltimore City?

Gillespie: Exactly. Yeah, yeah. And I’m glad that you brought that up, because we can build these little boxes of bias so quickly and so easily because our brain defaults to that, right? We try to make life manageable, to make things manageable, and I talked about that. And I say that, you know, there were times on the street that I might approach someone with a white officer beside me, you know, working in tandem, and I start to talk to a lower-income, working-class black person in Sandtown-Winchester, which is one of our neighborhoods here in Baltimore City. And within a few minutes, that person wanted to deal with the white officer, not with me. The way I spoke to them, the way even my body language, everything about me said, I really am not taking you seriously. And I have to admit, I mean, I had to really sit down and say, you know why is this not working? And so yeah, I want to put myself out there and then kind of invite them to do that. And I said with groups of recruits, does anyone here feel that they can talk about their bias? And I was surprised I had quite a few come forward and say, you know, well, I come from this background, I have this education or whatever, and here’s a bias for me. I want them in a constant discussion about this. So I was I was quite happy to put myself out there and do that.

Ryssdal: Yeah. No, and look, I think that can be a good lesson. Let me ask you this, though: You don’t get to be a detective in the Baltimore police force, you don’t spend 15 years on this force without spending time out actually doing the police work on the ground. Do you still get out there with the recruits and the mid-grade officers? And if so, what’s the mood of this moment then?

Gillespie: I go out on details. I was definitely out with the recent demonstrations. The mood is, you know — we’re talking about a culture in flux. We’re talking about a culture in change, and so morale can be up and down. It can be down a fair amount. But you know, I look at the recruits that we have, for one thing, and they’re taking this to heart. I do feel optimistic. We just it’s not going to be an easy fight because we have to continue the crime fight. We have to continue our role in terms of social guardians. We have to keep fixing our own house. So we have a lot going on.