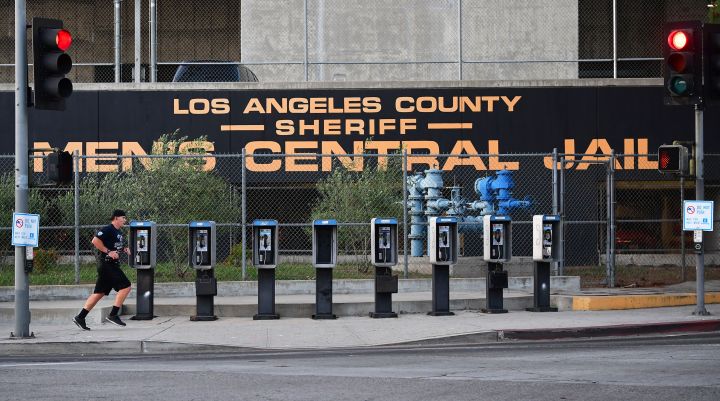 COPY
A man jogs past a row of telephone booths in front of the LA County Men's Central Jail on May 11, 2020, in Los Angeles, California. Frederic J. Brown/AFP via Getty Images
Elections 2020

A man jogs past a row of telephone booths in front of the LA County Men's Central Jail on May 11, 2020, in Los Angeles, California. Frederic J. Brown/AFP via Getty Images
Listen Now

We have results of a local race that drew national attention. Los Angeles County voters approved Measure J, a criminal justice reform that would boost social services spending by hundreds of millions of dollars.

The measure was proposed after the Black Lives Matter protests this year as a way to help address the racial disparities in policing and incarceration.

LA County jail is the biggest jail system in the country, and only 15% of inmates are white. That’s why activists say Measure J passing is a big deal.

The measure requires that at least 10% of the county’s unrestricted general fund go toward things that could cut down the mostly Black and Latinx jail population, like job training, mental health treatment and substance abuse programs. It cannot be spent on law enforcement or prisons.

“Currently 2.5% of unrestricted funds go to the things that Measure J is calling for. Measure J bumps that to 10%,” said Isaac Bryan, executive director of the UCLA Black Policy project and co-chair of the coalition that put the measure on the ballot.

He said the county currently spends about $230 million on those kinds of programs.

The LA County government will decide later this month where that extra money comes from, but Bryan said this is not intended to defund police.

“The measure doesn’t specifically call for any money to come from law enforcement agencies,” he said. “What it does do is it calls for an investment in the values and the priorities that folks have been marching for all year and have been fighting for much longer than this year.”

In the wake of protests against police brutality, cities like New York, Baltimore and Philadelphia cut their police budgets.

But what LA County voters approved is a more systemic shift in social service funding, according to Gary Painter, director of the USC Sol Price Center for Social Innovation.

“I think that you will see nationwide those who are looking at reforming criminal justice actually thinking about how one can do that,” Painter said. “This provides a blueprint for how a budget can be situated.”

He says if Los Angeles’ new spending is able help shrink its jail population, and increase employment, Measure J could prove to be a successful model.