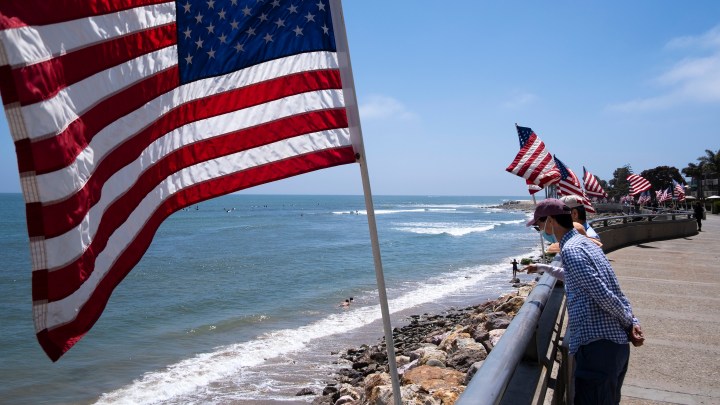 Let’s be real — a lot of people in this country could use a vacation, and it is a really tough time to try to plan one.

States and counties that have opened may be closing again. Rules about mask-wearing are different, and differently enforced, depending on where you go. And, of course, the number of new COVID-19 cases basically hits a new record every day.

Summer vacation spending — both a release and a huge economic driver —is in limbo. For many Americans, vacation will be “stay-at-home,” or at least “stay close-to-home,” this summer.

What’s hardly down at all is road-tripping. Casselano said people are waiting until the last minute to decide — based on COVID-19 numbers, beach openings and the like. It helps that gas is cheap.

“People are really turning to their own personal vehicles or rental vehicles, and that’s because [the] car provides so much flexibility,” Casselano said.

As for conditions once travelers arrive — with the exception of big urban convention venues — most hotels will be open, though with lower occupancy than before the pandemic, according to Chip Rogers, president of the American Hotel and Lodging Association.

Rogers said guests will see ramped-up cleaning in public spaces and will be greeted with new options like “the opportunity to do a number of things, from checking in, to receiving food, in a contact-less manner.”

“In places like pool decks, bars, restaurants, workout areas — if they’re open — you’ll see the seating or the equipment separated by space so that people can keep six feet of distance,” Rogers said.

Some people are still flying — mostly to see friends or family or for love.

Sarah Sumner, 27, is a yoga teacher living in Brooklyn.

“I met someone online and was like ‘Oh, my goodness I need to meet them in person,'” Sumner said. “So I ended up flying to Portland.”

Her flights in May and June were good, she said.

“They had taken out the middle seat,” she said. “Everybody was really waiting and being cautious and wanting to not only observe masks but also having social distancing.”

And her new romance? Well, she’s planning another trip later this summer.

But more airlines are trying to sell those middle-seats, reducing the distance between passengers.

“For example, American [Airlines] needs on some routes 75% load-factors to be profitable,” said Peter McNally, an analyst at Third Bridge. “In that case, you’re probably going to see middle seats being used.”

New York, New Jersey and Connecticut have now ordered 14-day quarantines for some out-of-state travelers as COVID-19 cases surge in parts of the U.S.