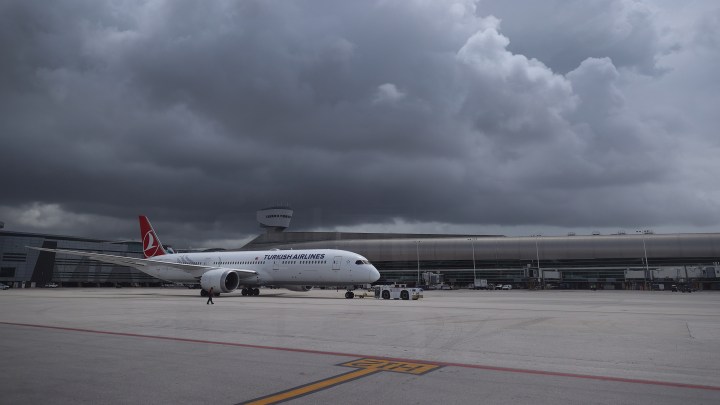 COPY
A Turkish Airlines plane is seen at the Miami International Airport in June 2021. Airlines are largely viewing spread of the delta variant as having a short-term impact, industry experts say. Joe Raedle via Getty Images

A Turkish Airlines plane is seen at the Miami International Airport in June 2021. Airlines are largely viewing spread of the delta variant as having a short-term impact, industry experts say. Joe Raedle via Getty Images
Listen Now

With Labor Day weekend coming up, millions of Americans are hitting the road — or the skies — for a late-summer trip.

It seems, however, not quite as many people will be vacationing as the travel industry anticipated earlier in the summer — when vaccination rates were climbing and people were returning to leisure travel with a vengeance.

This late-summer slowdown could delay full recovery for the industry. Air travel surged in early July, but by late August passenger counts were down 14%.

The latest surge in COVID cases has sapped consumers’ comfort with getting on a plane or going on vacation, said John Leer at Morning Consult.

“The pandemic continues to have a really strong negative effect — not only in their willingness to travel but also in their views of the economy more broadly,” Leer said.

But so far, airlines don’t seem particularly worried the pullback in leisure travel will list, according to Peter McNally at Third Bridge.

“The airlines are certainly behaving like the delta variant is more of a short-term blip,” he said. “Airlines are spending money — ordering new planes and getting other planes back into service.”

A temporary slowdown in air travel could give airlines time to get those mothballed planes ready, McNally said, and retrain pilots to fly them.