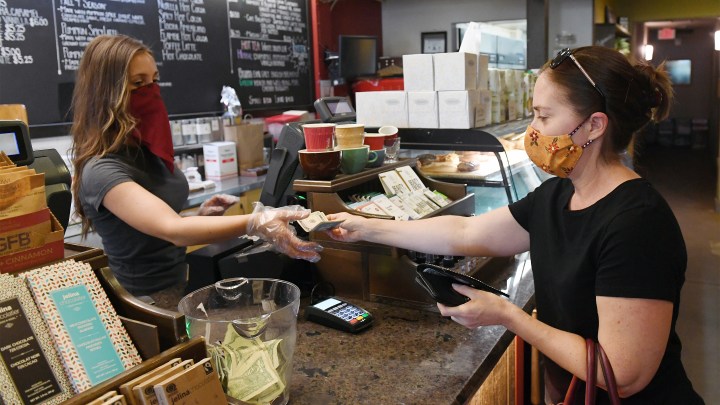 COPY
A woman makes a purchase at a Nevada coffee shop. Some small business owners are applying for PPP loans now because they weren't sure whether they were eligible before. Ethan Miller/Getty Images
COVID-19

A woman makes a purchase at a Nevada coffee shop. Some small business owners are applying for PPP loans now because they weren't sure whether they were eligible before. Ethan Miller/Getty Images
Listen Now

Businesses have one day left to get approval for loans from the $134 billion remaining in the federal Paycheck Protection Program. Now that it’s winding down, some businesses are getting their applications in at the last minute.

Back in April, a PPP loan sounded like a lifesaver to Richard Marks. He runs a professional training company called RDM Management Group, a business built on face-to-face meetings that haven’t been happening.

But Marks doesn’t have any employees. So from the outset, he wasn’t sure whether he was eligible for a loan.

“My interpretation was that I had to have employees on a payroll in order to apply for PPP,” Marks said.

About two weeks ago, Marks heard from another business owner with no employees who received a PPP loan. So Marks applied, and the Small Business Administration approved his application this past Friday. He’s relieved but wishes he’d known sooner that he was eligible.

Some business owners are resubmitting applications at the last minute, even though they’ve been trying from the beginning.

“I was just like checking my email,” said Holly Dreeuws, who co-owns Waterline Pools and Spas in San Diego. “I’ve never checked my email as much in my life. Constantly checking to see if I got anything.”

She was rejected four times before finally submitting a successful application. Once because the first round of PPP money ran out. Another bank said she couldn’t apply without an existing account.

After a while, Dreeuws said, she gave up hope. She was even thinking about taking out a personal loan to keep her business running.

But last week, she applied through a new bank and got approved.

“My husband and I were ecstatic. Ecstatic!” Dreeuws said. “It’s been a very stressful few weeks for us, financially.”

Not everyone’s quite there yet. Sherard Duvall, president and CEO of OTR Media Group, a media production company in South Carolina, has applied to seven lenders for a PPP loan without luck so far.

“It’s been a three-month slog and struggle,” Duvall said. “Frustrating is probably the best word to describe it. Upsetting, really.”

One bank did approve an application that Duvall submitted a couple of weeks ago, but he still hasn’t heard whether the SBA has approved it. He applied through another lender last week, but it’s asking for more paperwork.

“It looks like I’m going to be down to the wire,” Duvall said.

Duvall said the PPP money would help him pay employees, utility bills, rent and invoices he still hasn’t paid. But at this point, he has very little confidence that he’ll receive any assistance.