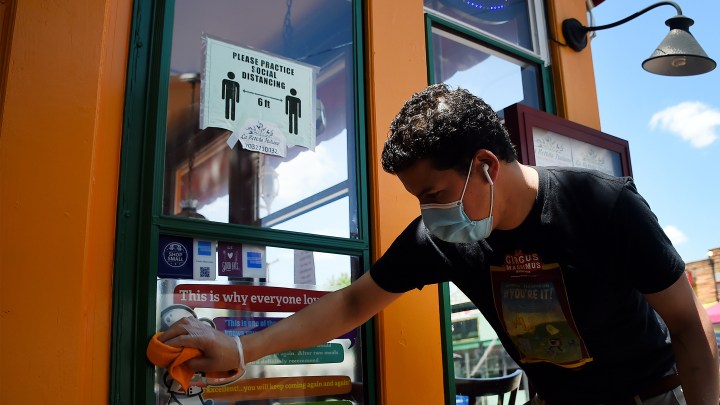 COPY
An employee wearing gloves and a face mask cleans a restaurant in Arlington, Virginia. The state is finalizing safety mandates to protect employees during the COVID-19 pandemic. Olivier Douliery/AFP via Getty Images
COVID-19

An employee wearing gloves and a face mask cleans a restaurant in Arlington, Virginia. The state is finalizing safety mandates to protect employees during the COVID-19 pandemic. Olivier Douliery/AFP via Getty Images
Listen Now

Virginia is set to become the first state to create workplace safety mandates for dealing with the coronavirus pandemic. The state’s health and safety board voted Wednesday to enforce a new set of rules intended specifically to prevent workers from contracting COVID-19 on the job.

“Folks are saying there’s a lack of social distancing, no requirements for masks, no [personal protective equipment] and then a fear of retaliation if they bring something up,” he said.

Yarashes represents many low-income poultry workers, hundreds of whom have contracted COVID-19 in the state. His organization petitioned Virginia to create these new emergency safety rules, which are still being finalized but will likely include mandates around social distancing, disinfection and notification to workers about likely exposures — all punishable by fines if businesses don’t comply.

“The key here is enforceability,” said Yarashes, as that piece has been missing from similar federal Occupational Safety and Health Administration guidelines.

The agency still hasn’t adopted legally binding standards for how businesses must deal with COVID-19 as it has for hazardous chemicals or bloodborne diseases. It’s merely offered recommendations, said David Michaels, who headed OSHA during the Obama administration.

“OSHA can’t enforce very much,” he said. “It could essentially say ‘You have to follow current existing OSHA rules,’ but those are pretty weak and they’re very vague.”

Under Michael’s leadership, OSHA had been drafting a set of enforceable standards for airborne infectious diseases in the wake of the H1N1 pandemic, but that process was halted when President Donald Trump took office, and the agency has declined to put emergency standards in place.

Nicole Riley, the Virginia state director for the National Federation of Independent Business, said her members need some leeway to individualize their responses to a threat that has been constantly evolving and that the state’s new rules are too prescriptive.

“They’re trying to apply a one-size-fits-all approach,” she said. “And they already have the authority to be able to go after bad actors.”

Federal law does require employers to provide a workplace “free from recognized hazards,” so even in the absence of COVID-specific standards, the agency could fine employers who fail in that duty.

But during the pandemic, OSHA has issued only one citation to an employer, despite about 4,000 complaints, said Ann Rosenthal, a former solicitor for the agency.

“If OSHA really wanted to make its enforcement position clear and make sure employers understood that there is a real enforcement threat, it would be able to issue citations in less than three months,” she said. “And it would issue them with pretty high penalties and a lot of press, and make sure that everybody knew about them.”

While more states may look to follow Virginia’s path and adopt enforceable standards of their own, less than half of states have their own OSHA plans with the authority to do so. The rest are under federal jurisdiction.