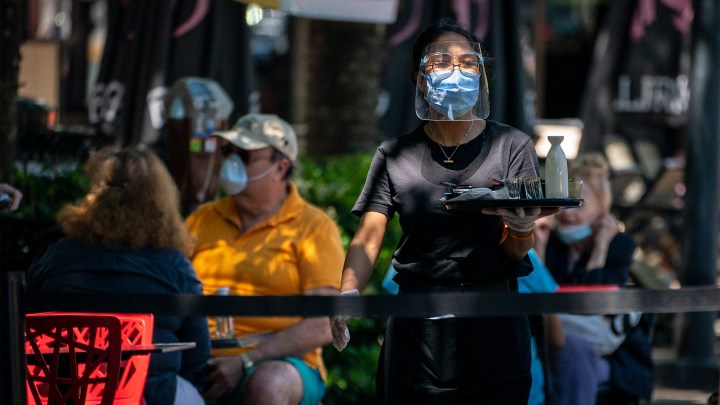 Workplaces around the country are getting back to normal despite an upswing in COVID-19 cases in more than 20 states. So what responsibility do employers have to keep track of sick workers?

We’ve heard a lot about big outbreaks of COVID-19 at workplaces like meatpacking plants, nursing homes and e-commerce warehouses. But in many cases, employers aren’t actually reporting those themselves.

“It is stunning, the lack of obligations on employers to report this data, not only to workers, but also their community,” said Debbie Berkowitz, worker health and safety program director with the National Employment Law Project.

Most states don’t require employers to report COVID-19 cases to local health departments, though large workplace clusters are often identified by those agencies.

However, the federal Occupational Safety and Health Administration does require most companies with more than 10 employees to keep internal records of COVID-19 cases, but only when they’re confirmed and deemed “work-related.” And there’s an incentive for employers not to make those connections: Too many reported cases could trigger an investigation for unsafe working conditions.

“It’s a very difficult and onerous task to determine whether or not a COVID-19-positive case was work-related,” said Gina Fonte, a Boston attorney who specializes in workplace safety with Holland & Knight.

Fonte said OSHA requires employers to make a “good faith effort” to determine how a worker contracted the virus.

But what qualifies as “good faith” is somewhat open to interpretation, said John Ho, an employment lawyer with Cozen O’Connor in New York.

“If you’re a smaller employer, OSHA recognizes your resources are going to be somewhat limited, as opposed to a much larger employer,” he said.

Employers should first ask workers how they think they contracted the virus, he said. If they work mostly with the public or there has been a cluster of cases in their department, it may be assumed to be work-related — if there is no “alternative explanation.”

Especially now that so much of the economy has reopened and community transmission is widespread, she said, workers could be found to have exposure by eating out, going to get a haircut or visiting a friend. That could leave more openings to let employers off the hook for keeping track of their illnesses.

“They’re telling employers they need to record work-related cases,” she said of OSHA, “but they’re making it really easy for them not to.”