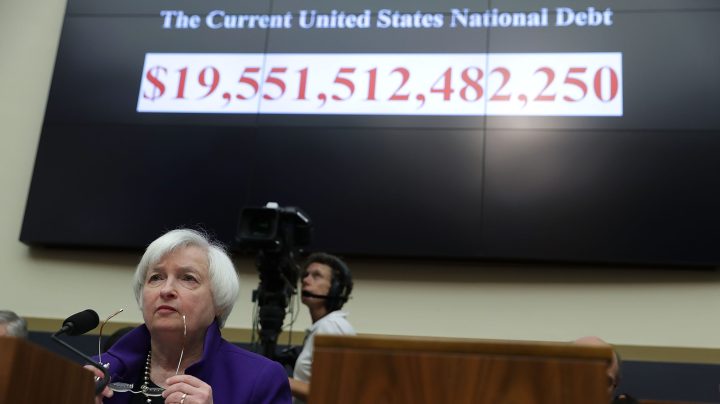 Congress has passed more than $3 trillion in coronavirus-related relief legislation, and Senate Majority Leader Mitch McConnell has said he’s looking into another bill. Part of the conversation is about what more government spending could mean for the national debt. Here’s what you need to know about how it works:

What the deficit has to do with debt

To understand the national debt, you have to start with the budget deficit.

“The deficit is the excess of the amount you’re spending this year over the amount that you’re taking in,” said Valerie Ramey, an economics professor at the University of California, San Diego.

The government spends money every year on things like Social Security and the military, and this year, the coronavirus rescue packages. A deficit happens when the government’s annual revenue, which mostly comes from taxes, isn’t enough to cover all that spending.

The Congressional Budget Office estimates that the coronavirus legislation has increased this year’s deficit from around $1 trillion to $3.7 trillion.

“Every time they spend more than they take in, that just adds up to their debt,” Ramey said. “If they keep doing it year over year as they have, the amount of debt, which means the total amount they owe people, keeps growing over time.”

The national debt is the amount of money that the government has borrowed. Right now, the national debt is well over $26 trillion. That number is so big in part because spending increases during times of crisis, like our current moment. However, the size of the national debt also has to do with other fiscal policy decisions made by Congress and the White House, including the 2017 Tax Cuts and Jobs Act, which has been financed by government debt.

How the government borrows

The government has lots of ways of borrowing money. Treasury bills, Treasury notes and Treasury bonds are all different types of fixed-income securities that work like loans to the government.

“When the government borrows money, it goes to the financial markets and it actually holds auctions,” said Kenneth Rogoff, former chief economist at the International Monetary Fund. “Say I’m the U.S. government and I’m going to pay you $10,000 10 years from now, and what are you willing to bid for that?”

These loans are held by state and local governments, mutual funds, pensions and individuals, all of which make money from the interest. The interest rate on these securities is low right now, in part because of economic uncertainty.

“In a very uncertain world, U.S. debt is probably as safe as it gets,” said Deborah Lucas, a finance professor at the Massachusetts Institute of Technology’s Sloan School of Management. The main reason U.S. debt is considered safe is because the government has never defaulted on its debt, meaning it’s always paid it back.

“We have greatly benefitted from having a stable economy, a stable political system,” Lucas said.

Is debt a long-term concern?

Right now, economists aren’t too worried about debt, according to Lucas.

“Part of the reason for that is because the interest rates are so low,” she said.

But even though it’s cheap for the government to borrow, it does still have trillions of dollars to pay back.

“When the government has to pay back debt, it has to eventually raise taxes,” Lucas said. “That means future generations are probably going to have higher tax rates than what we enjoy right now.”

Besides raising taxes, there is another way the government can pay of its debt: taking out more loans. Some economists advise against this and want to focus on paying back the debt, while others think government spending can continue.

Regardless of how they feel about debt in the long term, most economists are united on the topic right now.

“People should actually want the debt to be growing right now,” Lucas said. “This is exactly the time when governments are so important to be able to help people when things are really bad.”