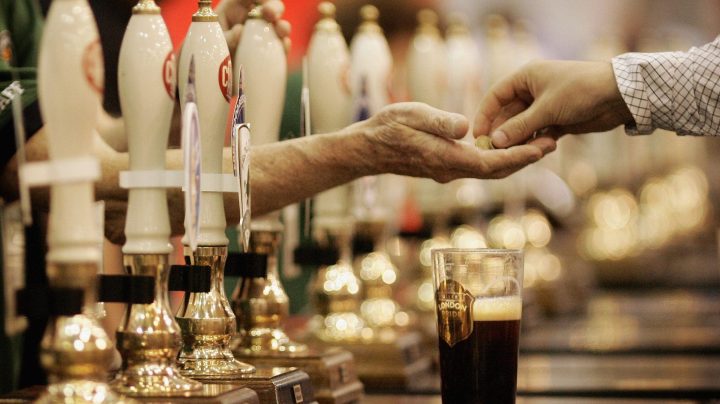 COPY
Who paid for the beer? Photo by Peter Macdiarmid/Getty Images
Kai Explains

Who paid for the beer? Photo by Peter Macdiarmid/Getty Images
Listen Now

A year and a half ago, Congress passed one of the biggest tax cuts in history. Speaking at a CNBC event this week, Larry Kudlow, President Donald Trump’s chief economic adviser, said this:

Back when the Republican tax plan was moving through Congress, proponents said it would “pay for itself.” We know it takes time for changes in the tax code to work their way through the economy, but we wanted to dig into that phrase “paid for.”

“So the thing about ‘paid for’ is that you’ve taken a verb ‘pay’ and you’ve gotten rid of all of the arguments,” said Jessica Rett, an associate professor of linguistics from UCLA. “We’re used to it in a sentence like, ‘Kai paid Jessica $10 for the beer.’ … When you say, ‘Kai paid Jessica $10 for the beer,’ you know exactly how much, and who is doing the paying, and who is receiving the paying. But if I just say, “The beer was paid for,” you just interpret the sentence as meaning, ‘OK, well, the beer was the thing that was paid for, and I’m just gonna have to assume that someone paid someone some amount,” she said.

Let’s take another look at what Larry Kudlow said:

In this case, “because there’s so many arguments missing, you’re not giving me any information about who’s paying for what. We tend to interpret it as meaning something like it’s self-funded,” Rett said.

So are these tax cuts being “paid for” like someone paying for a beer?

“These tax cuts are not being — I’m afraid to use the words now after this linguist — but they’re not being ‘paid for,'” said Howard Gleckman, senior fellow at the Tax Policy Center in Washington, D.C. “There’s simply no evidence that the tax cut paid for itself or even paid for two-thirds of itself.”

The broader question though, is who pays for tax cuts?

The Tax Cuts and Jobs Act included some provisions that lowered taxes and some that raised taxes. Gleckman said if you look at the net effect, you find that it reduced taxes by around $1.5 trillion. That means to “pay for” the tax cuts, someone has to pay the government $1.5 trillion.

There is still a lot we do not know about the long-term impact of this tax law, but there is some historical context that’s helpful here. President Ronald Reagan cut taxes in 1981, and President George W. Bush cut taxes in 2001.

So the next time you hear someone say a tax cut will “pay for itself” or that a tax cut has been “paid for,” come on back to marketplace.org and read this again.