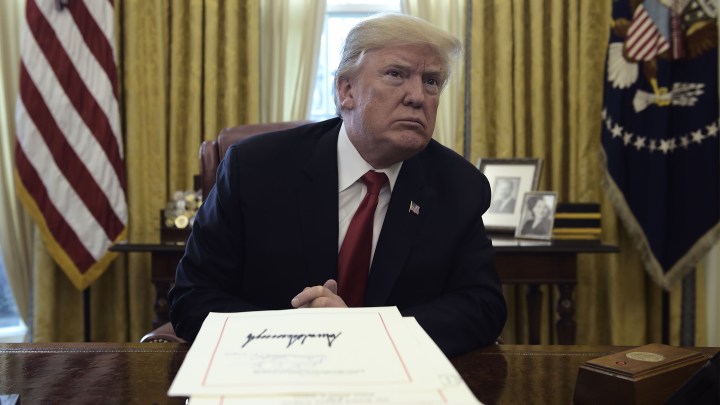 COPY
President Donald Trump at a signing event for the Tax Cut and Reform Bill in the Oval Office at the White House in Washington, D.C., on Dec. 22, 2017. Brendan Smialowski

President Donald Trump at a signing event for the Tax Cut and Reform Bill in the Oval Office at the White House in Washington, D.C., on Dec. 22, 2017. Brendan Smialowski
Listen Now

President Donald Trump has said his $1.5 trillion in tax cuts would be “rocket fuel” that would juice the economy and provide a windfall for taxpayers.

But according to a new report from the independent Congressional Research Service, they did no such thing.

Trump said the economy would grow at 4% to 4.5% after the tax cuts. It’s grown at 2.9%, which is still pretty good, but nothing new, according to Joel Slemrod, an economics professor at the University of Michigan.

Most of us are paying a little bit less in taxes, but Howard Gleckman at the Tax Policy Center said the real winners are corporations; they saw their tax rate cut almost in half. He said companies were all of a sudden sitting on piles of cash.

Not to their workers. The president said wages would grow substantially and quickly as a result of the tax cuts. But we’re not seeing that.

What we are seeing is companies buying their stock back from shareholders. So if you have stock in your portfolio, you’re a little bit richer.

“Anyone who has a substantial stock market investment portfolio has seen that portfolio probably having done better than it would have absent the legislation,” said David Gamage, who teaches tax law at Indiana University.

Gleckman at the Tax Policy Center said we also need to keep in mind that the Trump tax cuts didn’t happen in a vacuum.

“It may be that there were some economic benefits of this tax cut, but they were washed out by the economic downturns as a result of, for example, President Trump’s trade policy,” he said.

Gleckman said the tariffs on goods being paid by American consumers are basically equal to the amount of the tax cuts in the 2017 legislation.