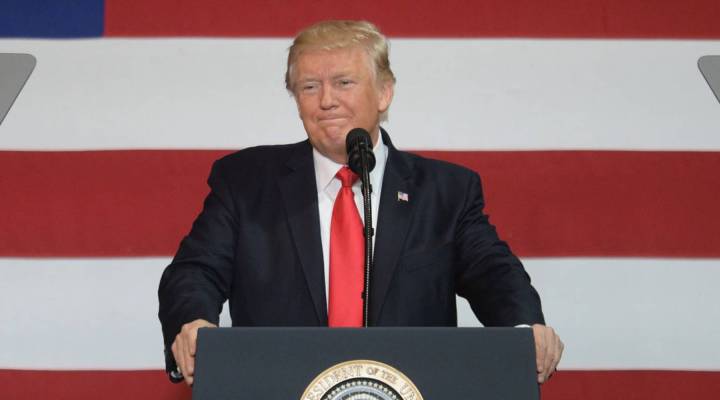 President Donald Trump said he wants to cut the maximum individual tax rate to 10 percent to 12 percent while speaking to the press Sunday in New Jersey. The current top rate is 39.6 percent.

The White House clarified Monday morning that the president was referring to the minimum rate, which is already at 10 percent, not the maximum,

Joe Rosenberg of the Urban-Brookings Tax Policy Center thinks the president was also referring to an earlier White House proposal that would take the seven existing tax brackets and collapse them into three, with rates of 10 percent, 25 and 35 percent.

“We estimate that [that proposal] would reduce revenues by about two trillion over 10 years,” Rosenberg said, adding the actual cost will depend on what incomes those brackets will apply to and what else these reforms might change.

“Taxpayers in the middle of the income distribution might see a tax cut of around $700 a year,” Rosenberg said. “It was closer to $40,000 for taxpayers in the top 1 percent.”

Dropping the top tax rate to 35 percent while changing nothing else would cut federal revenue by as much as $486 billion over 10 years, according to Scott Greenberg with The Tax Foundation.

“It’s a pretty big number in the context of some of the tax changes we’re talking about for reform,” Greenberg said. “For instance, some Republican lawmakers have floated the idea of reducing tax revenue by $1.5 trillion over the next 10 years.”

In other words, lowering the top tax bracket would account for about a third of those total proposed cuts, despite Trump’s claims last week that the wealthy wouldn’t gain at all from the reforms.

The president is scheduled to give more details in a speech Wednesday.