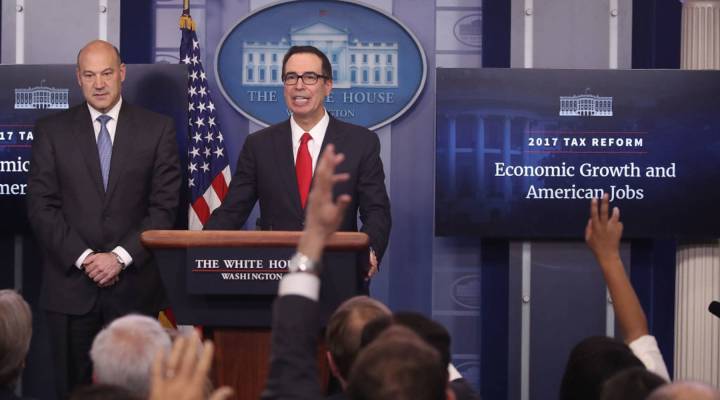 The White House unveiled a one-page outline of President Trump’s long-touted tax plan today. The proposal is short on details, but among other things, it calls for a reduction in the corporate tax rate, from 35 percent to 15 percent. It also cuts down the number of income tax brackets to three and gets rid of the estate tax.

On the surface, it seems like Trump’s tax reform plan would be a home run. He’s a Republican president, and there’s a Republican-controlled Congress. But with a divided GOP and Democrats who are not eager to roll over on their sticking points, what comes out on the other end of this legislative process may not look much like the president’s outline.

One of the big sticking points will be the cost.

“There are Republicans who say their primary concern, above all else, is fiscal responsibility and cutting the deficit, and they’re not just going to back down because there’s a Republican president,” said Lindsay Koshgarian, research director with the nonprofit group National Priorities Project.

For instance, Trump’s proposal to cut the corporate tax rate to 15 percent could add more than $2 trillion to the national debt over a decade, according to the Urban-Brookings Tax Policy Center.

“I think that’s going to be a big problem for him with members of the Republican caucus who don’t want to see that big increase in debt,” said Robert Pozen, senior lecturer at the MIT Sloan School of Management.

The same thing goes for cutting the estate tax and other taxes. If those cuts are not paid for, Trump may have some trouble getting Republicans on board. And it’s unlikely he’ll get support from Democrats.

So what might tax reform look like once it’s been put through the wringer in Congress? At the very least, there will probably be some decrease in the corporate tax rate, maybe closer to what corporations pay in Europe and Asia, said Eric Hananel, at the accounting firm UHY Advisors.

“I think that 20 percent is more realistic relative to world tax rates,” Hananel said. “So I think that we’re going to be closer to that.”

That is, if tax reform manages to pass Congress.