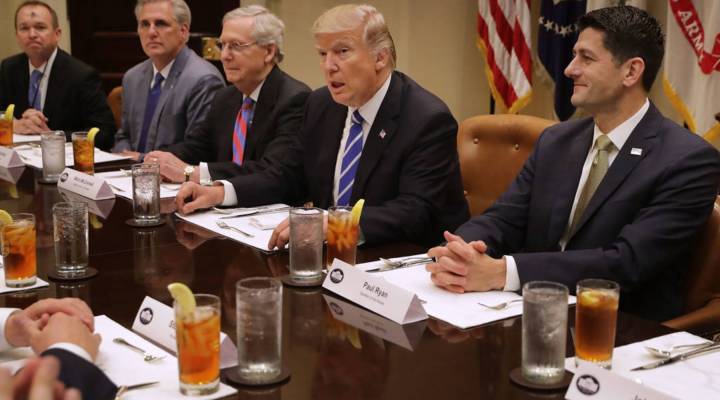 COPY
President Donald Trump with Mick Mulvaney, far left, director of the Office of Management and Budget, and Republican congressional leaders at a working lunch in the Roosevelt Room on Wednesday. Chip Somodevilla/Getty Images

President Donald Trump with Mick Mulvaney, far left, director of the Office of Management and Budget, and Republican congressional leaders at a working lunch in the Roosevelt Room on Wednesday. Chip Somodevilla/Getty Images
Listen Now

There’s been a lot of talk from the Trump team about reforming the country’s tax system, both on an individual and corporate level.

During his first address to Congress last night, President Donald Trump’s discussion of the issue included a call for massive tax relief for the middle class and a tax-rate reduction for companies. At one point on the campaign trail, Trump said he wanted to reduce taxes from 35 percent to 15 percent for big and small businesses.

Chris Farrell, a Marketplace contributor, said we can expect tax cuts, but he’s doubtful that any major tax reform will come. His skepticism stems from the lack of details that have come out about the president’s plan. Plus, he noted, there may be some disagreement between Trump and his party on how to approach any changes.

A key part to House Speaker Paul Ryan’s corporate tax reform is border adjustment, which would basically tax imports and exempt exports. Trump has hinted that he supports the basic idea, but hasn’t quite endorsed it, Farrell said.

“We have Republican control of Congress. We have a Republican president,” Farrell said. “But they may not agree on major tax reform.”

But Glenn Hubbard, a dean at Columbia University who served as chair of President George W. Bush’s Council of Economic Advisers, didn’t expect detail from a speech like this.

“I think what President Trump needed to do, and in my view did do, was to help reset expectations for growth,” Hubbard said.

And there’s a health care-related obstacle, aside from dissent among Republicans, that may ultimately slow down his plans to reform America’s tax structure.

JPMorgan Chase CEO Jamie Dimon recently told the bank’s annual investor day audience that he thinks meaningful reform might not happen until Capitol Hill sorts out the issues they have with the Affordable Care Act. Which may mean waiting until 2018.

Hubbard said that for any meaningful tax reform to be enacted, it needs to happen this year.

“Market expectations have been raised, and I fear they’ll be dashed if we don’t have real tax reform,” Hubbard noted. But he’s optimistic, arguing that there’s been enough good work done in the House and by Trump’s team to make this year possible.