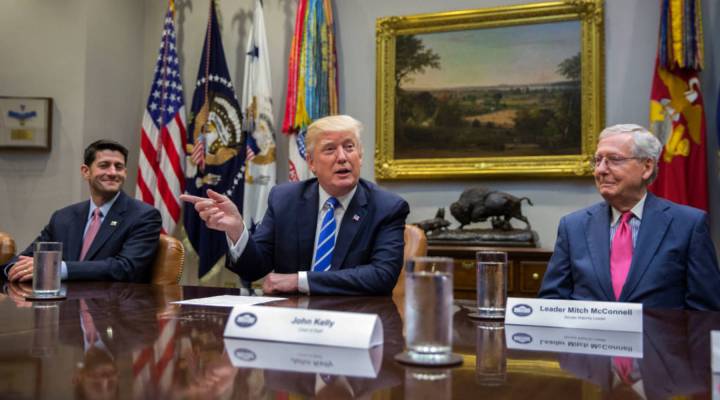 COPY
President Donald Trump with Speaker of the House Paul Ryan (L) and Senate Majority Leader Mitch McConnell (R), delivers remarks during a meeting with members of Congress and his administration regarding tax reform in the Roosevelt Room of the White House on September 5, 2017 in Washington, DC. Shawn Thew-Pool/Getty Images

President Donald Trump with Speaker of the House Paul Ryan (L) and Senate Majority Leader Mitch McConnell (R), delivers remarks during a meeting with members of Congress and his administration regarding tax reform in the Roosevelt Room of the White House on September 5, 2017 in Washington, DC. Shawn Thew-Pool/Getty Images
Listen Now

Republicans have been promising to overhaul the U.S. tax system by the end of this year. That might include a cut to the corporate tax rate, currently 35 percent.

President Trump has said that rate makes it harder for American corporations to compete abroad and holds them back from investing at home. And he’s clear about what he thinks it should be: 15 percent.

Getting there won’t be easy. It would mean losing out on trillions of tax dollars over a decade, said Jennifer Blouin, an accounting professor at the Wharton School.

“The money has to come from someplace,” Blouin said. Congress would have to either take on more debt to pay for federal programs, or start making some choices.

“There’s a whole menu of items that people can select from,” she said. “It’s just how many things do we need to give up to get this rate reduction.”

Legislators could, for instance, repeal every single tax deduction corporations currently get.

“The problem is there just aren’t enough of them that corporations currently use to get us anywhere near a 15 percent rate,” said Lily Batchelder, a professor at the NYU School of Law.

Other options: Congress could get rid of some of the tax deductions for individuals or impose new taxes, Batchelder said. Both would be tricky politically.

That’s one reason the consensus view in Washington is that Trump won’t get his 15 percent tax rate.

“I think 20 percent, 25 percent is probably where we’re going to end up. That’s reasonable,” said Wharton’s Blouin. “But that’s still a pretty big chunk of change.”

Think of it this way: every percentage point cut in the corporate tax rate would cost the U.S. Treasury an estimated $100 billion over a decade.