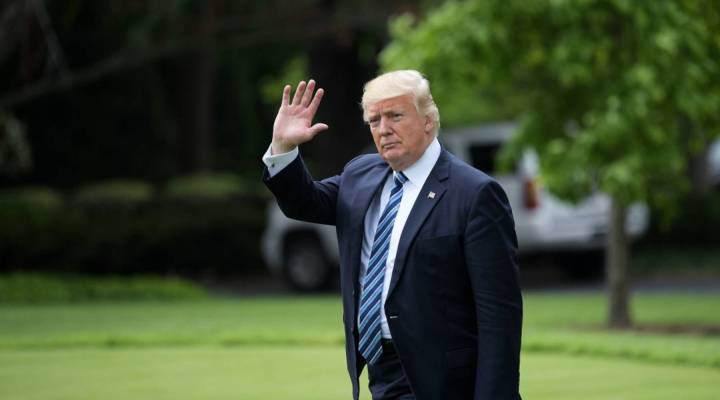 COPY
President Trump makes his way to Marine One on the South Lawn of the White House. MANDEL NGAN/AFP/Getty Images

President Trump makes his way to Marine One on the South Lawn of the White House. MANDEL NGAN/AFP/Getty Images
Listen Now

In an interview with The Economist, President Trump said it’s OK that his tax plan would increase the deficit, because it wouldn’t do so for very long. He said it would “prime the pump” of the economy. And then he said he came up with that phrase.

For the record, Donald Trump did not invent the phrase “priming the pump” in an economic context, or really any context.

“Pump priming goes all the way back to the 1930s,” said Peter Sokolowski, editor-at-large at Merriam-Webster. “We do have evidence of, for example, FDR using it during the Great Depression, talking about his own policies.”

In the olden days, like hundreds of years ago, you’d have to put some water into a pump to get it started. In economics, pump priming is a standard Keynesian concept.

“A burst of government spending or a burst of tax cutting can start there being more spending, which leads to more income, and the economy starts revving up,” said Larry Summers, who teaches economics at Harvard.

But this metaphor is usually used when the economy is in the dumps, Summers said, not in a situation like we have now with 4.5 percent unemployment and strong corporate profits.

“It’s pretty unusual to talk about priming a pump when the pump has been actively pumping water for a long time,” Summers said.

The other thing is that priming the pump, well, it’s more of a phrase that Democrats would use.

“It is an odd phrase for a Republican president to use,” said Chris Edwards, an economist with the Cato institute. Democrats would use it to describe stimulus plans — increasing spending or income tax cuts.

That means it focuses on cutting business taxes and deregulation. That usually has a different and contested metaphor: trickle down.